If you are not already dreaming and drooling about the prospect of building a high-end PC around AMD's flagship Ryzen 9 5950X processor, some newly leaked benchmarks might just do it. Over on Geekbench (where else?), there exists a handful of benchmark runs showing the mighty processor nudging a little past 5GHz.
The Ryzen 9 5950X is a decked out slice of silicon constructed with 16 physical CPU cores and 32 threads of computing muscle. It has a 3.4GHz base clock and up to a 4.9GHz boost clock, plus 64MB of L3 cache, 8MB of L2 cache, PCIe 4.0 support, and all of the performance benefits of AMD's fancy Zen 3 CPU architecture.
AMD's rated max boost clock does not factor in its Precision Boost Overdrive (PBO) feature. Under the right conditions with ample cooling, PBO allows for even higher clocks in short bursts, for added performance as needed. And that appears to be what we are spying in a handful of early benchmark results on Geekbench, presumably obtained by the same user and testbed. 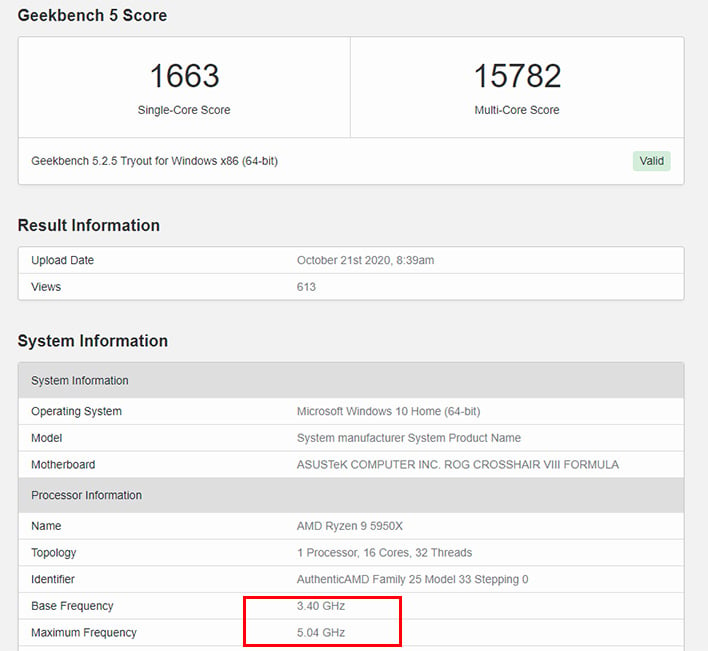 I say this because there are four recent Geekbench entries, all of which show the Ryzen 9 5950X hitting 5.04GHz in an ASUS ROG Crosshair VII Formula motherboard with 32GB of RAM installed. There is also an entry showing the same chip hitting 5.01GHz in an ASUS ROG Strix X570-I Gaming motherboard with 16GB of RAM.
One of them is shown above, and here is a high level overview of all five entries exceeding 5GHz... 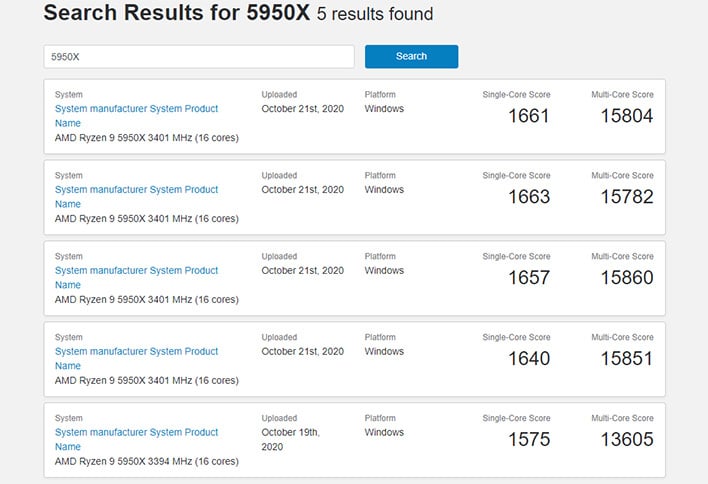 If we cherry pick the best single-core and multi-core results from the bunch, the Ryzen 9 5950X at 5.04GHz scored a high of 1,663 in the single-core test and 15,860 in the multi-core test. Or we can average out the entries (the top four runs were obtained at a max 5.04GHz clock), which works out to 1,655.25 for the single-core test and 15,824.25 for the multi-core test.
Scores are kind of all over the place for the Ryzen 9 3950X, but in one of the more recent benchmark runs in Windows, it posted a single-core score of 1,361 and a multi-core score of 14,833, for a rough reference.
As spotted by @TUM_APISAK, AMD's other chips seem to be hitting higher-than-advertised clocks as well, courtesy of the company's PBO feature. Specifically...
AMD's Ryzen 5000 series is already an enticing launch, assuming it delivers claimed 19 percent IPC uplift over Zen 2. We will find out soon enough—these chips release to the public on November 5.