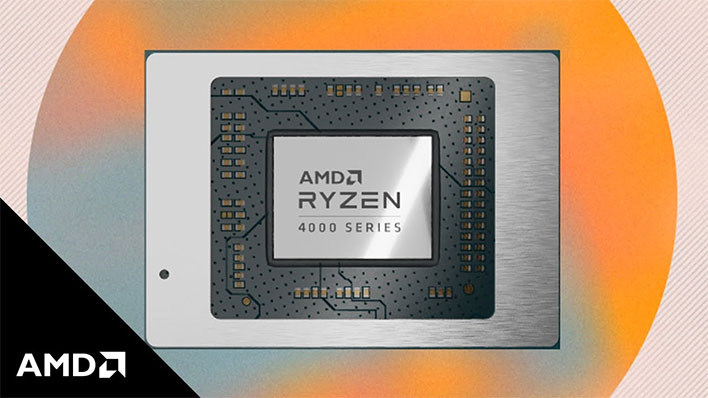 We are eagerly awaiting the launch of laptops running's AMD's latest generation mobile Ryzen 4000 series processors, which are built around the company's 7-nanometer Zen 2 CPU architecture. Zen 2 in mobile form is certainly enticing. Will it be worth the wait, though? Some newly leaked benchmarks may provide a partial answer to that question.
You may have noticed that we have covered a lot of leaks lately. Twitter user and prominent leaker APISAK has been on fire, and deserves another tip of the the hat for spotting some Geekbench entries supposedly starring AMD's Ryzen 7 4800H mobile CPU. We'll get to those in a moment, but first let's go over the specifications.
The Ryzen 7 4800H is AMD's top mobile CPU. It wields 8 cores and 16 threads, with a 2.9GHz base clock and 4.2GHz max boost clock. It also has 8MB of L3 cache, 4MB of L2 cache, and a default 45-watt TDP (it's configurable from 35-45W). On the integrated graphics side, it sports a 7-core GPU based on AMD's Vega architecture, clocked at 1,600MHz. 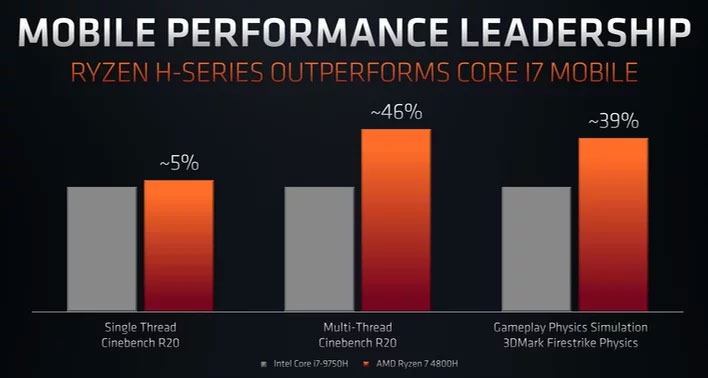 According to AMD, the Ryzen 7 4800H is around 46 percent faster than Intel's Core i7-9750H in Cinebench R20 when running the multi-threaded portion of the benchmark, around 5 percent faster in the single-threaded portion, and around 39 percent faster in 3DMark's Firestrike Physics test.
The Ryzen 7 4800H has an advantage in the number of cores and threads, as the Core i7-9750H is a 6-core/12-thread CPU with a 2.6GHz base clock and 4.5GHz boost clock. It also has 12MB of L3 cache and a 45W TDP (configurable down to 35W).

AMD providing its own numbers is one thing, but hands-on testing will reveal the whole story. That will have to wait for another day, unfortunately. In the meantime, let's have a look at the leaked Geekbench 4 scores. 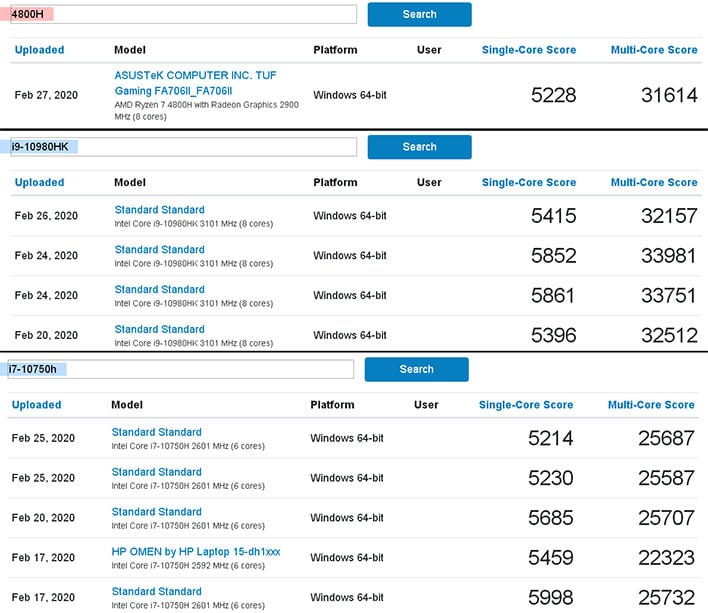 The Ryzen 7 4800H is represented by an ASUS TUF Gaming FA706 laptop, according to the listing. Bearing in mind that cooling and drivers can all play a role in how these things shake out, the Ryzen 7 4800H posted a single-core score of 5,228 and a multi-core score of 31,614.
Rather than compare against Intel's Core i7-9750H, it is more interesting to see how the Zen 2 CPU stacks up against Intel's upcoming Comet Lake-H lineup. Fortunately, we have some leaked data in that regard as well.
Pitted against the Core i7-10750H, AMD's processor is roughly on par with some of the lower scores in the single-core test, and several hundred points behind at the top end, with Intel's chip posting a high of 5,998. In the multi-threaded test, the Ryzen 7 4800H wins every round by around 6,000 points.
The latter is to be expected—Intel's Core i7-10750H is a 6-core/12-thread processor, going up against an 8-core/16-thread chip. As for the single-core test, it's slightly disappointing to see the Ryzen 7 4800H lag behind some of the better scores, but again, there are various factors that we can't account for at this early stage. All in all, it's a decent showing, just not spectacular on the single-core front.
There are also some scores for a supposed Core i9-10980HK processor, which levels the playing field with 8 cores and 16 threads. When compared against this chip, Intel's part puts a bit more distance between it and the Ryzen 7 4800H in the single-core test, and comes out just a bit ahead in the multi-core test. Intel's part is working with higher base and boost clocks, and will likely drive higher pricing as well, so no need to be too discouraged (if at all) if you're pulling for AMD. 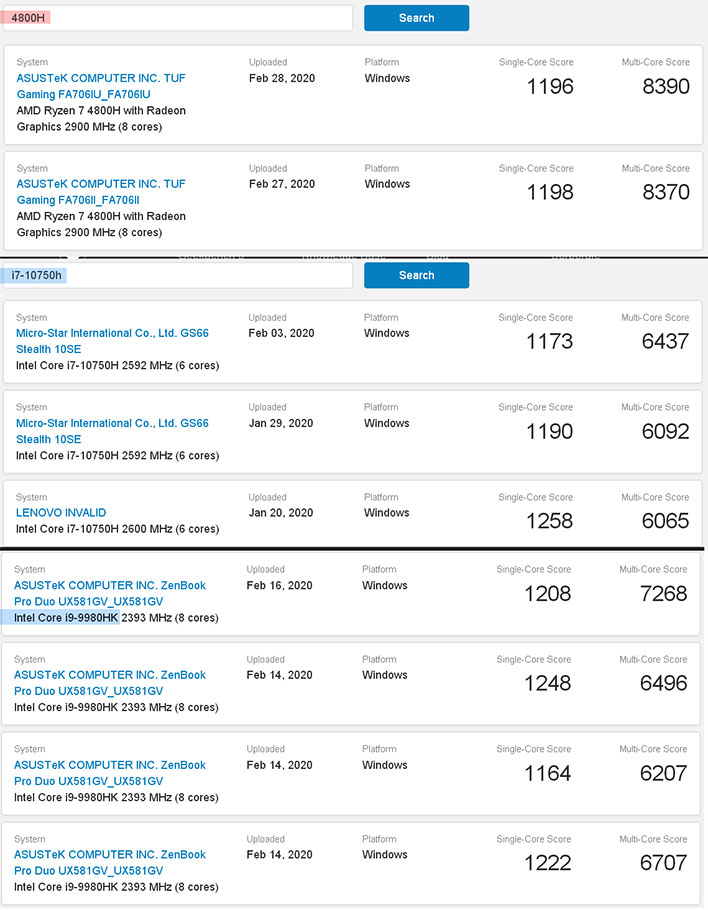 APISAK also uncovered a Geekbench 5 benchmark run, and rounded up a bunch comparison data. In Geekbench 5, the Ryzen 7 4800H scores 1,196 in the single-core test and 8,390 in the multi-core test. The latter is generally on par with Intel's Core i7-10750H scores, while the latter predictably outguns Intel's chip.
Compared to the Core i9-9980HK, which brings the same number of cores and threads to the table, the Ryzen 7 4800H still maintains a lead in multi-threaded testing. We'll have to wait and see how it fares against the Core i9-10980HK, but overall, the Ryzen 7 4800H looks to be in good shape.
Most of these numbers are from leaked benchmark runs, so keep that in mind. As always, we don't want to read too much into the numbers, however interesting they might be.