All of these early (read: leaked) Zen 3 benchmarks invite hyperbolic statements, because simply put, the numbers indicate AMD has hit a home run with its Ryzen 5000 series. We will know for sure soon enough, when the new chips land at retail in a few days. In the run up to the retail launch, however, another early benchmark for the Ryzen 5 5600X shows its performing extremely well.
The Ryzen 5 5600X is, for the moment, the most affordable version of Zen 3. Priced at $299, the Ryzen 5 5600X sports six physical cores and 12 threads, a 3.7GHz base clock and 4.6GHz max boost clock, 32MB of L3 cache and 3MB of L2 cache, and PCI Express 4.0 support, wrapped in a 65W package. It is also the only Zen 3 CPU (so far) to come with a stock cooler—AMD's Wraith Stealth—which adds a bit of value.
AMD says Zen 3 offers a 19 percent IPC (instructions per clock) improvement over Zen 2. That is enticing, especially since you can drop a Zen 3 chip into an existing X570 or B550 motherboard, as well as X470 or B450. It is the last processor series from AMD to be based on its AM4 socket.
Regarding the latest performance leak, Twitter user @TUM_APISAK posted a Cinebench R15 screenshot obtained from a Ryzen 5 5600X (or at least that is how the benchmark recognizes it). Have a look... 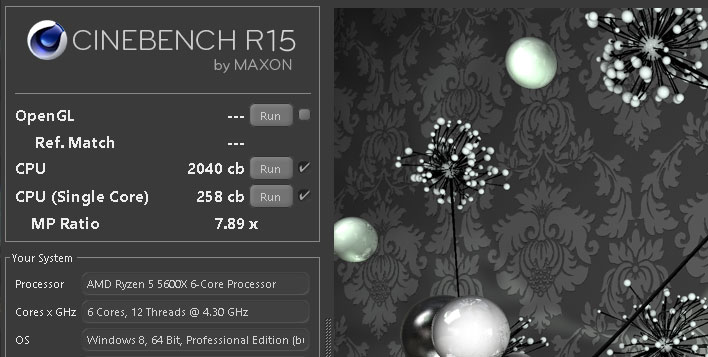 Those numbers do not mean a whole lot by themselves, not unless you live and breath Cinebench R15 scores. But if we take a peek at Cinebench R15 scores collected by CPU-Monkey, we can make some comparisons. Notably, Intel's Core i5-10600K scores 1,615 in the multi-core portion of this benchmark, versus the Ryzen 5 5600X scoring 2,040.
This is a relevant comparison, because (A) Comet Lake is Intel's latest desktop architecture, and (B) the Core i5-10600K is also 6-core/12-thread CPU. And in this particular benchmark run, the Ryzen 5 5600X scores around 26.3 percent higher.
The same database shows the Ryzen 5 3600XT scoring 1,671 in this test. Some compared to its Zen 2 counterpart, the Ryzen 5 5600X score nearly 21 percent higher. Good stuff.
If we shift focus to single-core performance, the Ryzen 5 5600X scores 258. According to scores collected by CPU-Monkey, the Core i5-10600K scores 215, while the Ryzen 5 3600XT scores 207. So we are looking at 20 percent and 24.6 percent gains versus 6-core/12-core Comet Lake and Zen 2 CPUs, respectively.
Single-core performance is not the same as IPC (clocks have to be the same and so do the testing conditions). But this highlights what is potentially in store. Zen 3 is stacking taking Comet Lake's lunch money and making Zen 2 look like old news (neither are actually slow, mind you), based on the leaked benchmarks to date.