In absolutely no uncertain terms, AMD claims its Ryzen 5000 desktop processors are the fastest gaming CPUs in the world," a distinction that Intel has held onto for a long time. The company is also claiming a hefty 19 percent IPC (instructions per clock) uplift over its Zen 2 stack. If you are worried it is just a bunch of lip service, you might be encouraged by PassMark's updated CPU Mark rankings, which show Zen 3 sitting on top in single-threaded performance.
More specifically, the lowest end (so far) Zen 3 CPU, the Ryzen 5 5600X, leads the way with the highest benchmark score, as of this writing. AMD's other Zen 3 CPUs will undoubtedly leapfrog the Ryzen 5 5600X once they find their way to the database, but it hardly matters, in terms of comparing Zen 3 to the best consumer desktop chips from Intel.
Have a look... 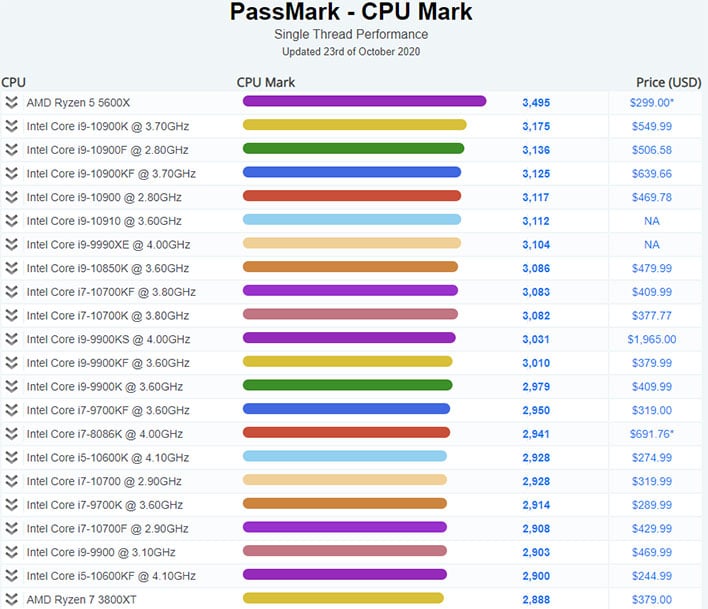 The Ryzen 5 5600X is the first and so far only Zen 3 CPU to make an appearance in the CPU Mark database. And it jumps right to the top with a score of 3,495. That is 10 percent higher than Intel's Core i9-10900K, while costing $250 less (MSRP comparison). And compared to the Core i5-10600K, which has the same number of cores and threads, the Ryzen 5 5600X is more than 19 percent faster in this benchmark arrangement.
We had to crop the rankings because it goes on almost forever, but much further down the list sits the Ryzen 5 3600X with a score of 2,677. In comparison, the Ryzen 5 3600X scored around 30.5 percent higher than the CPU it is replacing.
The Ryzen 5 5600X is a 6-core/12-thread CPU with a 3.7GHz base clock, 4.6GHz boost clock, 32MB of L3 cache, 3MB of L2 cache, and a 65W TDP. It is also the only Ryzen 5000 series CPU (so far) to come with a packaged cooler, the Wraith Stealth.
Compared to the previous generation Ryzen 5 3600X, the Ryzen 5 5600X comes out of the gate commanding a $50 higher debut price. But if this benchmark is any indication, the premium is money well spent on much better performance.
Obviously this is just a single benchmark, and none of the Ryzen 5000 series CPUs are actually available to purchase yet. A bigger, more accurate picture of performance will only be taken when actual reviews hit the web. Fortunately it won't be long now—the Ryzen 5000 series lands on retail November 5.