Today is a day that calls for patience. Obviously that relates to the US presidential election results, which are still being tallied. But we also have another day to go before AMD's Ryzen 5000 series lands on retail shelves, with reviews and benchmarks in tow. Unless your name is Lawrence Timme, in which case you track down a Ryzen 5 5600X on eBay and begin overclocking and benchmarking it.
That is exactly what Timme did, taking his recently acquired Ryzen 5 5600X to 4.85GHz with the help of a water cooling setup. Good stuff, and before we get into the thick of things, let's recap the stock specifications.
The Ryzen 5 5600X is, for now, the least expensive Zen 3 chip. It sits below the Ryzen 7 5800X, Ryzen 9 5900X, and Ryzen 9 5950X, wielding 6 cores and 12 threads clocked at 3.7GHz (base) to 4.6GHz (max boost). The chip also has 32MB of L3 cache and 3MB of L2 cache. And of course AMD has said Zen 3 offers a 19 percent IPC uplift compared to Zen 2.
So, let's get back to Timme. He came across an actually Ryzen 5 5600X on eBay before the retail launch, as he describes in a YouTube video. In that initial video, he showed the chip running at an all-core overclock of 4.7GHz, and a 4.95GHz single-core overclock, with air cooling. The chip was mated to a 16GB kit of Patriot Viper Steel DDR4-4000 RAM and ASUS Crosshair VII Hero motherboard.
In a subsequent video, he switched over to water cooling, and promptly hit an all-core overclock of 4.85GHz, at 1.35V. Have a look...

That is a beefy cooling solution for sure—it consists of an EK water block and a giant 1,080 radiator with nine fans attached, and dual pumps, all sitting in Timme's garage. He then proceeded to benchmark the overclocked chip in Cinebench. 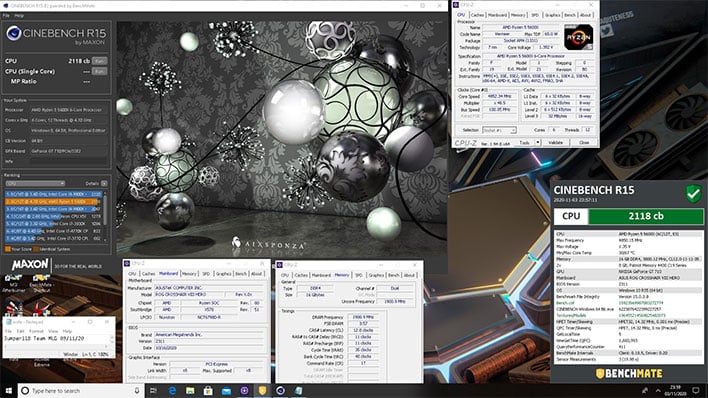 At that speed, he achieved a multi-core score of 2,118 in Cinebench R15 and 4,888 in Cinebench 4,888. , and a multi-thread score of 4,888. We do not have our own Cinebench R15 scores to compare against, but we do have some Cinebench R20 values. Here is how his benchmark run compares to our own testing, in Cinebench R20...
That is not too shabby at all. Obviously the Ryzen 9 5600X is heavily overclocked and aided by a beefy water cooling setup. But seeing it edge out a Ryzen 7 3700X with two additional cores and four additional threads by around 2 percent is nifty. And compared to Intel's Core i5-10600K with the same number of cores and threads, the overclocked Ryzen 5 5600X scored 36 percent higher.
It will be interesting to see how well (or not so well, whatever the case might be) AMD's Ryzen 5000 series as a whole is able to overclock under tamer cooling conditions. Likewise, it will not be long for an accurate reflection of performance is revealed, as embargoes on benchmarks and reviews get lifted with tomorrow's retail launch. Stay tuned.