AMD is set to make waves in the CPU space with its initial Ryzen 5000 series, but you can bet there will be more offerings than just the four SKUs it announced earlier this week. Potentially poised to draw some attention, there could be a Ryzen 5 5600 (non-X variant) on the horizon, at a tantalizing price for someone looking to assemble a mid-range PC.
As things currently stand, the most affordable Zen 3 processor is the Ryzen 5 5600X, which carries a $299 MSRP. It wields 6 cores and 12 threads and runs at a 3.7GHz base clock with a 4.6GHz max boost clock. It also features 35MB of total cache and a 65W TDP, and (so far) is the only Ryzen 5000 series processor to come with a bundled air cooler, the Wraith Stealth.
It looks like a good value for the money. That can actually be said about the entire stack so far, depending on if the chips live up to AMD's performance claims. We will have to wait and see, but in the early going, some Cinebench R20 benchmarks have popped up, and the Ryzen 5000 series as a whole is looking really strong. 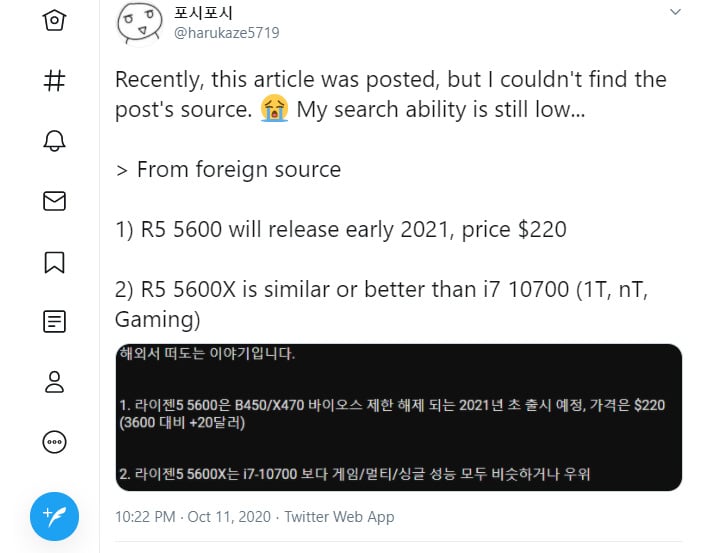 As for the unofficial Ryzen 5 5600, Twitter user @harukaze5719 claims to have found (and lost) and foreign article pointing to the chip making a debut sometime early next year, with a $220 price tag. The article also apparently claims that the Ryzen 5 5600X will offer performance similar to or better than Intel's Core i7-10700 in gaming.
I'm a bit skeptical of this rumor, for a couple of reasons. For one, the price difference between the Ryzen 5 5600 ($220) and Ryzen 5 5600X ($299) is pretty wide—probably $80, assuming the $220 figure is rounded up from $219. And secondly, assuming the TDP is the same (65W), the price difference is likely to solely reflect differences in clockspeed.
It could still play out this way, and I am not ruling out the rumor entirely. But for the sake of comparison, here is how AMD handled the Zen 2 processors that these would replace...
There was a $50 gap between the two chips initially (now it's around $10), along with a 200MHz disparity and base and boost clocks, and a 30W TDP difference. Additionally, they come with different coolers—Wraith Spire for the Ryzen 5 3600X and Wraith Stealth for the Ryzen 5 3600.
The Ryzen 5 5600X is already at 65W and comes with a lower end Wraith Stealth. So assuming the core and thread counts are the same, that leaves clockspeeds and potentially (but not likely) the cache arrangement.
On the flip side, if the Ryzen 5 3600 does end up debuting at $219 and the only specification difference is clockspeed, it would be a very intriguing chip (especially if it overclocks even just a little bit). Time will tell.