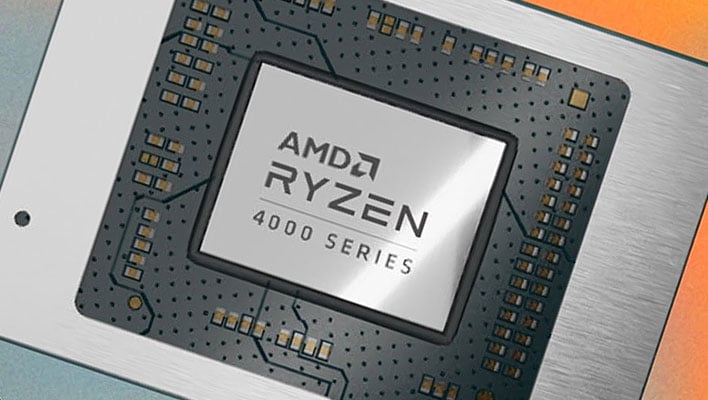 Soon we will start seeing laptops based on AMD's recently announced Ryzen 4000 series mobile processors, including thin and light designs running on Ryzen 4000U hardware, and more powerful solutions based on the Ryzen 4000H lineup. A couple of fresh leaks focus on the latter, and specifically the Ryzen 5 4600H with Radeon graphics.
Fortunately, no speculation is needed about the raw specifications—AMD already tipped its hand, so we know the Ryzen 5 4600H is a 6-core/12-thread processor with a 3GHz base clock and 4GHz max boost clock. It also features 8MB of L3 cache, 3MB of L2 cache, and a default 45W thermal design power (TDP) rating, which is configurable from 35-54W.
AMD's numbering scheme across its various Zen products is confusing, because they are not consistent. For example, an eventual Ryzen 4000 series on the desktop will be based on AMD's unreleased Zen 3 architecture, whereas its current generation Ryzen 3000 desktops processors are based on Zen 2. In mobile, the Ryzen 4000 series is also Zen 2, built on the same 7-nanometer FinFET node.
Zen primer out of the way, let's get to the leaked scores. There are two of them—one for 3DMark's Fire Strike benchmark, and the other for 3DMark's Time Spy test. Here's a look at the Fire Strike run... 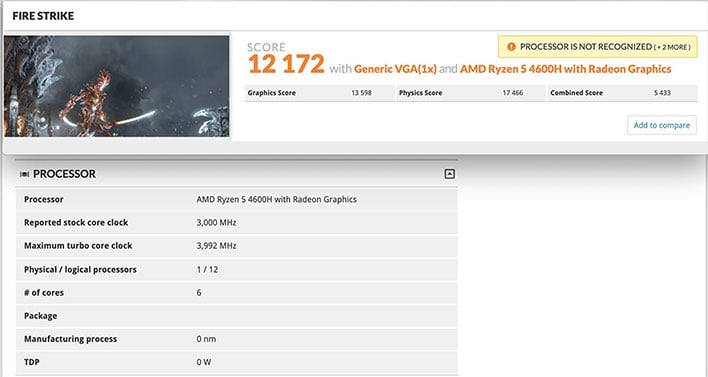 Focusing on the CPU alone, the Physics score is the one we are interested in, and that checks in at 17,466. For context, @_rogame rounded up the following data points...
In this singular benchmark, the Ryzen 5 4600H nips at the heels of Intel's Core i7-10750H. That's impressive, considering AMD's part is at a 700MHz boost clock disadvantage. In reality, this bodes well for upcoming laptops in general, regardless of whether they are running AMD or Intel hardware inside.
Here's a look at the Time Spy benchmark run... 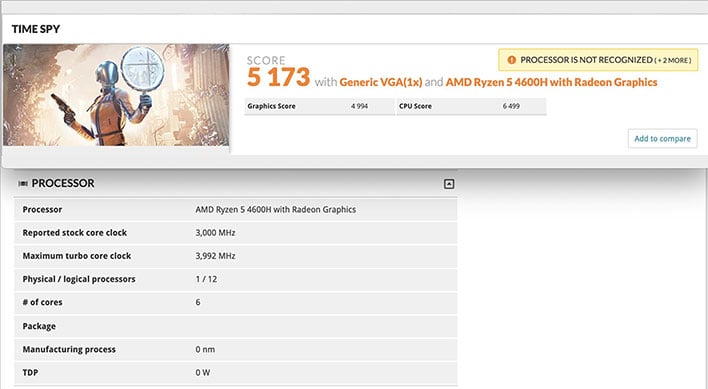 In the Time Spy benchmark, the Ryzen 5 4600H posts a CPU score of 6,499. Here are some other data point for context...
Once again, we see the Ryzen 5 4600H coming in close behind the Core i7-10750H, despite a 700MHz slower boost clock. AMD's chip is also working with less L3 cache (8MB versus 12MB).
We can only derive so much from leaked benchmarks. That said, if these results are an accurate reflection of performance to come, then it will really come down to pricing. The CPU numbers are rather close between the Ryzen 5 4600H and Core i7-10750H. And of course AMD's chips are rocking onboard graphics based on the company's Vega GPU architecture, so that's a bonus (though a shift to Navi would have been appreciated).
The fun is about to begin—AMD said there will be a dozen Ryzen 4000 laptops launching this quarter, and more than 100 designs by the end of the year.