Zen 3 is coming, and it's close enough that we can just about taste it. While the Ryzen 5000 family of CPUs just might squash just about every architecture before it in single-threaded performance, every member of AMD's new processor family we've seen so far has been a desktop chip. A couple of recent leaks, however, start to paint a picture of the Red Team's coming mobile lineup, which seems to have some twists and turns among it.

We'll start with the good news: Zen 3 APUs are apparently coming to laptops as part of the Ryzen 5000 product line. Over on Twitter, a leaker going by Executable Fix has done a reasonably good job of leaking part numbers and specs with accuracy. In one such ongoing thread, the part number 100-000000287-40 popped up, and rumor has it this is a Zen 3-based Ryzen 5 5600U, which is based on an APU codenamed Cezanne. The leak indicates that this is a six-core part, like current Ryzen 5 processors, with a 2.3 GHz base clock and a relatively modes 4.2 GHz boost. 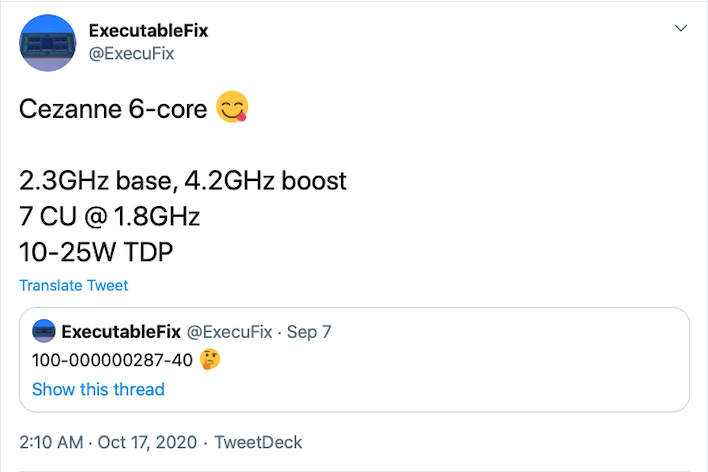 AMD's U-series processors are low-power, and typically slot into the same sort of 15W TDP that Intel's ultraportable CPUs occupy. These seem like reasonable numbers, even if the boost clock isn't in the stratosphere. Being a mobile part that's purportedly bound for thin-and-light notebooks, we would think this has to be an APU of some sort with dedicated graphics. And, according to the leak, that is indeed the case: an integrated graphics processor with seven Vega compute units (CUs), which would work out to 448 stream processors clocked at a relatively high 1.8 GHz. That again seems plausible based on the fact that the Ryzen 5 4600U has 6 CUs at 1.5 GHz.

The bad news, though, is that AMD had a chance to straighten out its numbering system, but has instead (again, supposedly) chosen to pollute the waters with Zen 2 APUs. We were quite fond of the Dell G5 15 SE and ASUS TUF Gaming A15 when they came through our offices earlier this year, for sure. However, Zen 3 looks like it's going to blow the doors off the older architecture. We wouldn't mind new Zen 2 APUs coming to notebooks, but it'd be better if they were in the 4000 series with their counterparts. 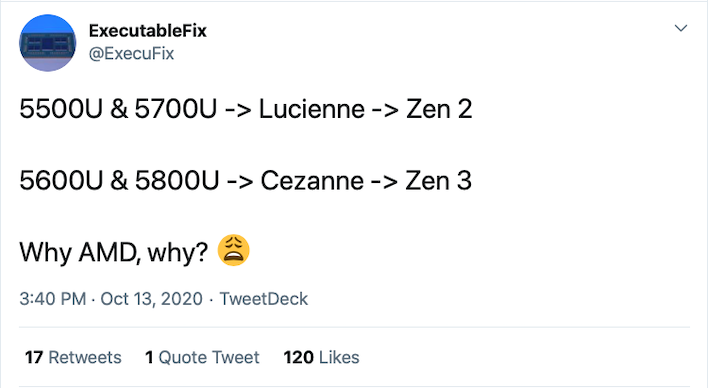 As a result, it seems that buyers are going to have to pay attention to the specific model numbers when selecting a laptop to make sure they get the latest CPU tech. Executable Fix says that the Ryzen 5 5600U and Ryzen 7 5800U will indeed be Zen 3 APUs, but other numbers may not. Specifically, Ryzen 5 5500U and Ryzen 7 5700U are rumored to be Zen 2 designs based on a new Lucienne APU. Clear as mud, right?

These rumors are just that, and should probably be taken with the appropriate grain of salt. However, the source does have a solid track record. No doubt that as the appropriate time draws near, AMD will have more to say about its mobile plans. We'll be there to report on it, too, and will keep you up to the latest as it unfolds.