Anticipation over AMD's upcoming Zen 3 product lineup is building, especially now with an unveiling just a little more than a week away. Waiting is the hardest part. To help pass the time, there has been an increasing number of leaks pertaining to purported Zen 3 parts in the wild (engineering samples), the latest of which highlights a substantial boost in single-threaded performance. Potentially, anyway.
The standard disclaimer applies when dealing with leaks and rumors. In this case, we are talking about a screenshot of a CPU-Z benchmark run posted to Twitter by @9550pro, which shows a mystery CPU presumed to be a Ryzen 9 5900X thrashing a current generation Ryzen 7 3700X in both multi-threaded and single-threaded performance.
Here is a look... 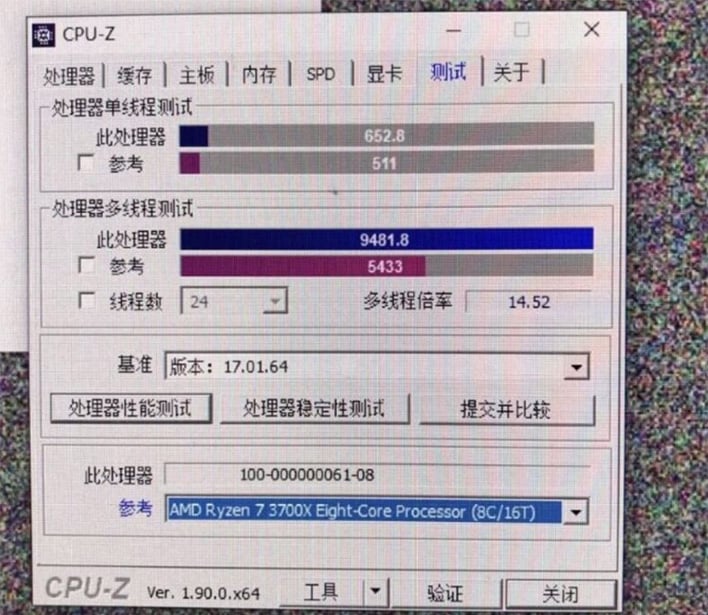 One of two identifying markers is the label "100-000000061-81" in the processor field. Just below is the reference field, which allows you select different CPUs to pull up their scores, for comparison. In this case, a Ryzen 7 3700X based on Zen 2 was selected. It has 8 cores and 16 threads clocked at 3.6GHz to 4.4GHz, as well as 32MB of L3 cache.
As for the mystery chip, the other identifying marker is the number of threads, which it shows as being 24. This suggests a 12-core/24-thread part. The assumption is that this is a Zen 3 part, and specifically the Ryzen 9 5900X. Having not yet been announced, CPU-Z would be unable to properly identify AMD's Zen 3 CPUs, so this is what we get.
Looking at the scores, the presumed Ryzen 9 5900X benched 652.8 in CPU-Z's built-in single-thread test and 9481.8 in the multi-threaded test. That amounts to performance gains of nearly 28 percent and a whopping 74.5 percent, respectively.
We would expect the Ryzen 9 5900X to post a better multi-threaded score, because it wields four more cores and eight more threads than the Ryzen 7 3700X. That makes the single-threaded numbers arguably more interesting.
Bear in mind that this is not necessarily representative of Zen 3's IPC (instructions per clock) boost, whatever that might end up being. Why not? For one, the test beds are undoubtedly different. Even more importantly, we have no earthly clue what clockspeed the Ryzen 9 5900X is running at, because this particular screenshot does not share that information.
To measure IPC, we would need to see the two chips run at the same speed in the same testbed with the same OS and driver conditions, and then compare the results. That is not what we get here. It is still interesting, just not all-telling.
That said, a better match-up would be the Ryzen 9 5900X versus the Ryzen 9 3900X. If comparing those two, the Ryzen 9 5900X's single-threaded score is around 25 percent better, and the multi-threaded score is about 15 percent higher.
Zen 3 is the next architecture on AMD's roadmap. It leverages an enhanced 7-nanometer manufacturing process, and promises to bring with it faster clocks and unspecified gains in IPC. We could see some new features as well.
Hang tight—AMD will introduce its first Zen 3 processors on October 8 (next Thursday).