It is entirely possible that Gigabyte has tipped a new AMD motherboard chipset for its upcoming Zen 3 refresh (Zen 3+), otherwise known by the codename Warhol, which is expected to arrive by the end of the year. While nothing is confirmed, rumor has it AMD is planning to launch a stack of Zen+ CPUs to put itself in a better position to compete with Intel's Alder Lake-S processors.
If and when that day arrives, AMD might also launch a new X570S chipset. What additional features it might bring to the table remains to be seen, but there is at least some evidence to suggest a new chipset could be in the works. Have a look... 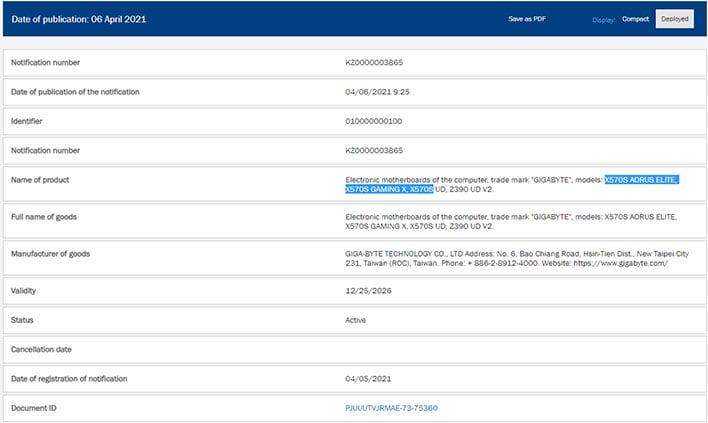 Gigabyte registered a few unreleased motherboards with the Eurasian Economic Commission (EEC). They include the X570S Aorus Elite, X570S Gaming X, and X570S (along with a Z390 UD V2). It is not clear if the "S" designation is something Gigabyte is doing on its own, or if AMD is prepping a new chipset. The latter seems more likely.
We have not seen a ton of Warhol leaks, though it did show up last year on a supposed roadmap. Assuming that roadmap was accurate, Warhol will basically be a refresh of AMD's Ryzen 5000 "Vermeer" CPUs, built on an enhanced 7-nanometer manufacturing process. It also seems highly likely that Warhol will be based on the same AM4 socket as Vermeer.
The expectation is that Warhol will either deliver a small-to-modest IPC (instructions per clock) performance gain over Vermeer, or higher clock speeds (or perhaps both). It's also possible that the accompanying X570S chipset will add more features to the mix, though probably minor ones—don't expect support for PCI Express 5.0 or DDR5 memory, not until Zen 4 arrives next year.
Bear in mind that AMD also refreshed its Zen 2 CPUs, with the launch of several Ryzen 3000 "XT" models. They arrived with 100-200MHz higher boost clocks, while retaining the same core and thread counts. However, they arrived without the potential benefit of an enhanced chipset.
As for Intel, it just launched its Rocket Lake-S processors, which represents the end of the road for its aging 14nm node. Later this year, it will attempt to make a splash with its hybrid Alder Lake-S processors, which mix high performance cores with power efficient cores. Alder Lake-S will also embrace some new and upgraded technologies, such as DDR5.