Over the last few years, AMD has made big changes to its Radeon Software control panel on an almost yearly cadence. This time around it's been a little longer than that, as those updates typically launch around the end of the year, though this specific roll-out was extended to April. What has AMD's Radeon team been up to all this time? We got an early look at the drivers that are shipping today in order to get a feel for what's improved and what's new. Let's take a look together... 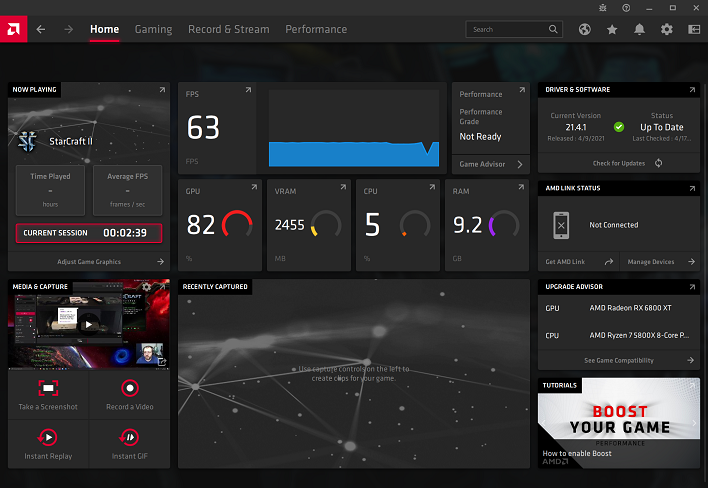 One of the nicer, yet more unexpected, features of the new Radeon Software is the installer itself. One of the frustrating things about graphics drivers is just how big the installer is and how much software it wants to put on your system. With this release, AMD has added some choices: Full Install, Minimal Install, and Driver Only. The Full option installs exactly what it always has. That includes the driver, control panel, AMD's ReLive streaming software and various monitoring tools, much of which is new and we'll talk about later. 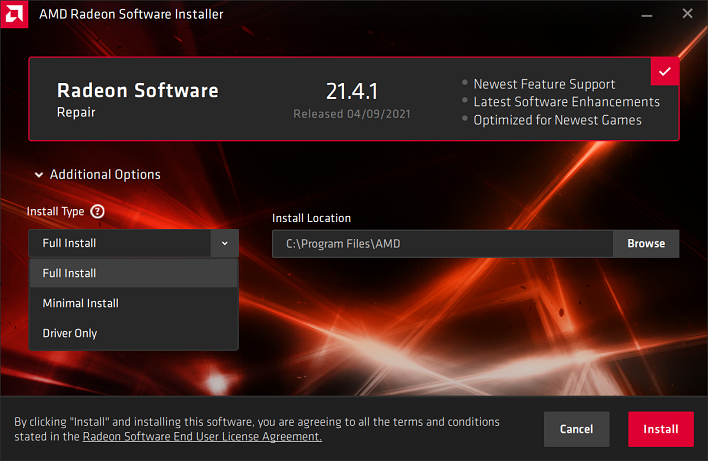 On the other hand, the Minimal install trims the payload back a bit, removing ReLive and the monitoring tools. That restricts the control panel to just graphics driver options so you can still make changes to things like FreeSync and see device information. Finally, the Driver Only option eschews the control panel altogether and and just install the graphics driver. Any changes to image quality will have to be done through game or application interfaces. This option also puts the kybosh on overclocking, unless you use an external tool.

While Microsoft seems to be the cause of some of the biggest bugs in Windows lately, unstable driver software is a common problem as well. To that end, AMD has made some changes to its methodology for verifying the stability of its drivers. The company has also added a couple of new tools to Radeon Software that should help get bugs resolved more quickly. The focus is on getting bug reports and crash logs to the development and quality assurance team quicker than in the past, so that issues can be addressed right away, rather than relying on reports on AMD's community forums or Reddit to get analytics data to the right place and the right AMD team members. 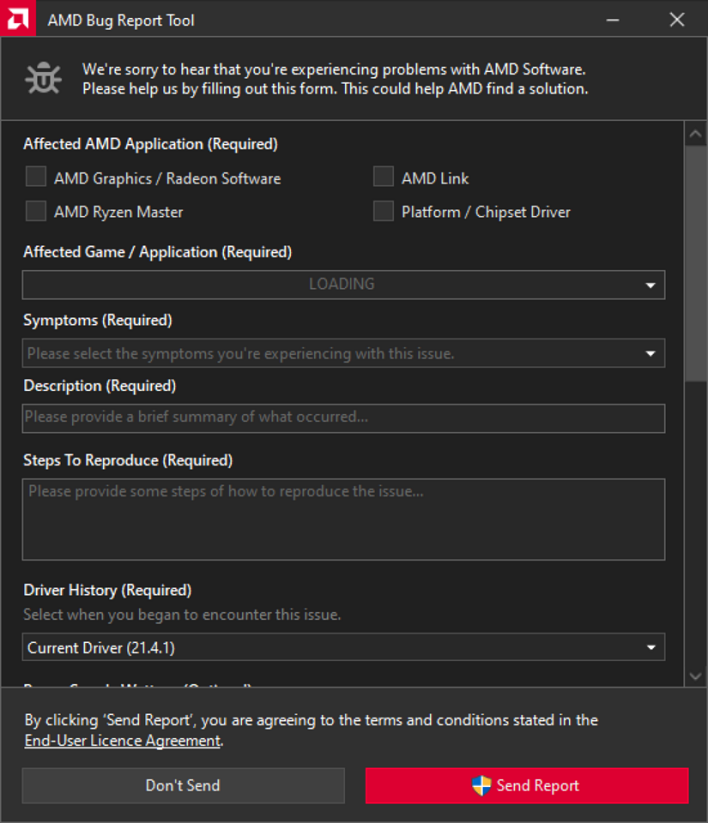 The latest Radeon Software comes bundled with the AMD Bug Report Tool, which captures the system state and launches automatically any time specific errors are detected. The tool can read a lot of information about the system's current state, including installed software and the PC's hardware configuration to minimize how much effort users have to make to report an issue. Then it asks users what they were doing at the time of the crash. That report goes off to AMD and "directly" to the engineering and QA teams. This feature has been around for a while as a separate download, but it's now part of AMD's drivers to get it into more hands. To launch it manually, click the bug report icon in the top toolbar of the control panel.

On the other hand, crashes are best when they're avoided entirely. To that end, AMD has created a new Crash Defender tool that will try to preserve in-flight data and keep systems running when they'd otherwise crash or generate a Blue Screen of Death. Rather than allow the system to keel over, Crash Defender will perform a Timeout Detection and Recovery (TDR) cycle and restart the graphics card mid-load. Those are annoying, especially in the middle of a game when trying to pull off certain maneuvers, but it's much more preferable to outright crashing and losing progress.

AMD has its share of image quality enhancement options under a couple of different brands. Responsive Gaming is AMD's efforts to improve responsiveness and smoothness, and covers things like FreeSync and Radeon Anti-Lag, which now supports DirectX 12. Vivid Visuals covers FidelityFX and Radeon Image Sharpening. New to the Vivid Visuals family are a couple of color calibration modes that come at no performance cost. These new options require a Radeon RX 5000 or 6000 graphics card up to Radeon RX 6900 XT, or an AMD Zen 2 APU with Vega-based Radeon Graphics, like a notebook with a Ryzen 4000 or 5000 series processor.

If you do any color-critical work at all, like photo editing or video production, you're familiar with monitor calibration. The new Radeon Software control panel exposes controls for adjusting the color temperature, hue, contrast, and saturation manually. The defaults are geared towards a 6500K color temperature, which is pretty close to a "true white" point, with all of the other controls set to 0 indicating no adjustment.

Beneath those options, AMD has added a Color Deficiency Correction section. These is a wonderful addition for gamers who have to live with some form of color blindness. The company has added three sliders to adjust the intensity of corrections for red, blue, and green color blindness. This will adjust colors the user can't see to other hues to make them easier to discern. Screenshots are not affected with these options turned on, though, so if players want to capture what they're doing, it won't adjust the screenshot for the selected color blindness, making it understandable to others who aren't affected. 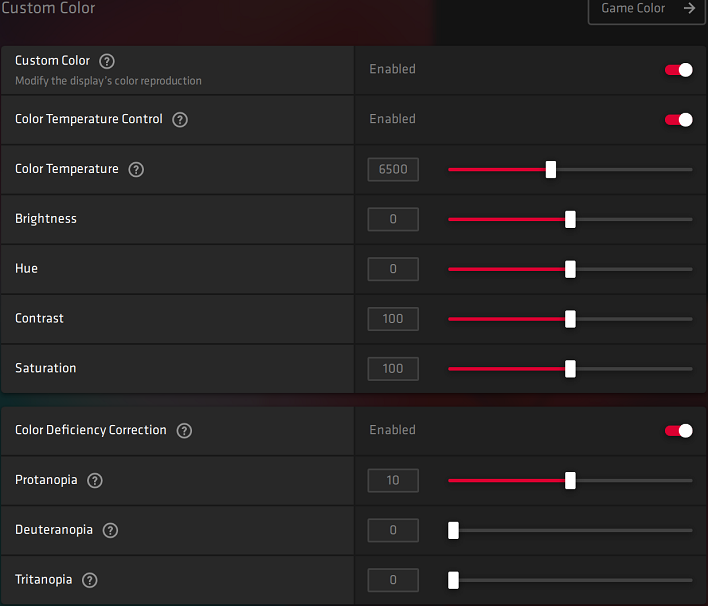 Unfortunately, what's still missing in the image processing section is AMD's answer to NVIDIA's Deep Learning Super Sampling (DLSS). AMD has talked about how its FidelityFX Super Resolution will just work on any game and doesn't require machine learning, but it's still not available. DLSS 2.0 isn't supported in every game, but at least it's available. AMD's ray tracing performance tends to trail that of equivalently priced GeForces, too, and FSR should help close the gap with super sampling the image to keep it looking clear while rendering fewer pixels when it ships later this year.

Everyone and their siblings want to stream their gameplay to Twitch, YouTube, and a host of other services. AMD's ReLive software has aimed to make that task easier for aspiring gamers, and the company has stepped up its streaming chops in this release. The Recording and Streaming section of the control panel serves as host to a very configurable streaming setup, including separate bitrates for streams and local  recordings, supported codecs (including HVEC x.265 support), and one-click streaming to a host of different streaming platforms.

The most interesting option is the addition of an Adaptive Quality for streams. The system will automatically adjust streaming settings based on your internet connection, particularly upload. Lots of cable subscribers are used to having uploads limited to just a few megabits per second, where a high-quality 1080p stream needs around 6-7 mbps just for itself, let alone the game being streamed. 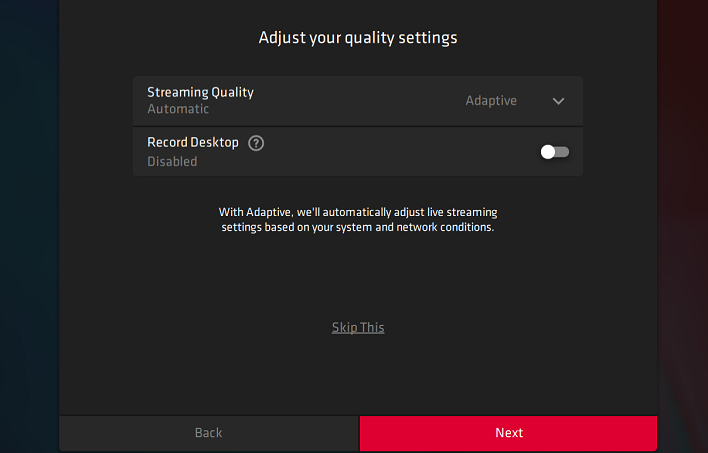 To test out the new features, we took to Twitch and played a little StarCraft: Remastered. Rather than embarrass myself on the competitive ladder, the game was just a four-way Free-For-All featuring three computer opponents. Take a look at the quality of the stream in the trimmed video below.

AMD says that over a million people downloaded AMD Link for iOS, tvOS, Android, and Android TV for the first time in the last year. According to AMD, that works out to tripling the AMD Link user base. With all these new users on board, AMD took the opportunity to make some big changes to the streaming and sharing platform, which saw its last update with Adrenaline 2020 a little over a year ago.

First of all, just like the online streaming options, local streaming via AMD Link now has an automatic mode that can increase resolution and framerate based on network conditions using a new automated QoS algorithm. The quality of the video can get pretty intense, too, as 1440p at 144 Hz is supported. Audio didn't get ignored, either, as AMD Link can now stream 5.1 audio rather than falling back to plain old stereo.

The AMD Link app has been available for iOS and Android for quite a while, and that includes set-top boxes running tvOS and Android TV. New with AMD Link 4.0 is Windows version of the app. It comes bundled with the driver, or can be downloaded separately. AMD says it designed navigation to work with a gamepad on the receiving end, for selecting games and making quality changes. This allows a low-powered notebook to stream games from a more powerful machine in another room. As with all of the local streaming options, this works best when both ends of the connection are using wired Ethernet, but Wi-Fi up to 50 megabits is supported.

We took AMD Link for a spin on an Apple iPad Air with a Bluetooth version of the Xbox One controller tethered. Even though the iPad relies on Wi-Fi, our in-home streaming looked great and had very minimal input lag. While this is not a novel concept -- covered by both NVIDIA's Shield and Steam's own in-home streaming -- the AMD Link software can take more full advantage of AMD Radeon hardware, including HEVC x.265 if supported.

While many of AMD's past software features are still a big deal today, the company hasn't rested on its laurels. We were particularly pleased to see AMD Link for Windows, along with all of the big enhancements to streaming, both locally and online. AMD's ReLive software has always been pretty simple to use, but stream quality was always a bit of a guessing game. The automated process that handles encodes based on network conditions goes a long way towards fixing that. 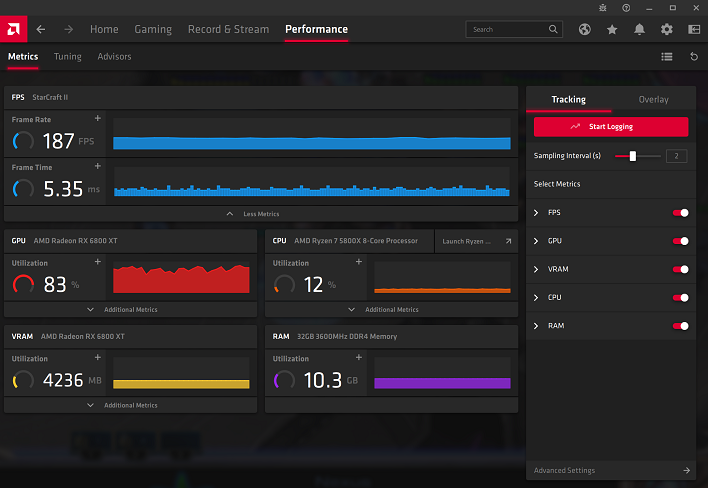 Alongside the feature enhancements, a renewed focus on stability and driver quality are always appreciated. While AMD's drivers typically perform pretty well for us, every vendor occasionally gets a bad rap when something goes awry. We like the idea of feeling directly connected to developers and QA analysts with the Bug Reporting Tool, which isn't exactly new, but is now built into the driver. We're also big fans of avoiding crashes whenever possible. While an automatic TDR cycle isn't ideal, we'd much rather be able to stay in the game when an error occurs than crash to the desktop.

AMD's software continues to evolve and grow in ways that are both intuitive and powerful. There's no downside to upgrading, as the latest drivers always have the most recent fixes and performance enhancements. When you're ready to dive in, head on over to AMD's driver page and grab the Radeon Software update package. And if you want to chat live with AMD's Frank Azor to discuss this latest release, be sure to hit our Facebook page or YouTube channel at 9:30AM EST today (4/20). Frank will be joining us live.