Rumors abound on a pair of upcoming graphics card from AMD, namely the Radeon RX 6600 XT and Radeon RX 6600, both of which briefly appeared on PowerColor's website earlier this week. Their launches are inevitable—it's only a matter of time before AMD fleshes out its RDNA 2 lineup with more affordable cards. But when exactly will we see them, and how much will they cost? Well, leakers have put out some interesting information about one of the cards.
The card in question is the Radeon RX 6600 XT, and the consensus from leakers is that it will arrive sometime in August. If that is a case, a launch is anywhere from three and a half weeks to seven and a half weeks away from this very moment. It could very well end up being a paper launch because GPUs are so hard to come by these days, but that's another topic.
What about specs and pricing? 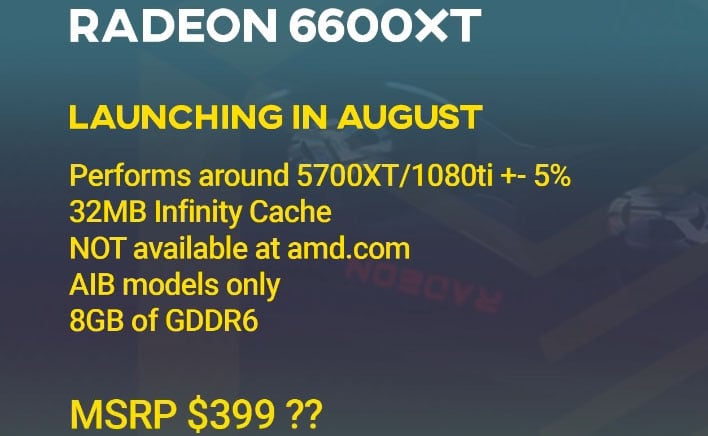 A couple of prominent leakers, Coreteks and Moore's Law Is Dead, both have thrown out $399 as a potential figure. The former says that is just speculation on his part, while the latter says he has been hearing $399 from sources, but also notes that AMD is testing the waters and could (and should) come in at a lower price point.
For context, let's have a look at pricing for the current lineup (and these are MSRPs, not ridiculous street pricing resulting form the shortage)...
Those are the four consumer desktop SKUs that exist within AMD's RDNA 2 lineup. Whether or not there ends up being a non-XT model of the 6700 remains to be seen, but a Radeon RX 6600 XT is definitely coming, and at least at the outset it will occupy the next rung down.
Past leaks suggest the Radeon RX 6600 XT will be based on a Navi 23 XT GPU with 2,048 stream processors and 8GB of GDDR6 memory linked to a 128-bit memory bus, for 256GB of memory bandwidth. It is also said to feature 32MB of Infinity cache.
For comparison, the Radeon RX 6700 XT features 2,560 stream processors, a 2,581MHz boost clock, 12GB of GDDR6 memory, a 192-bit memory bus, 384GB/s of memory bandwidth, and 96MB of Infinity cache.
If the leaks are true, AMD will not sell a reference model of the Radeon RX 6600 XT directly to consumers, and instead it will only be offered through add-in board (AIB) partner designs. And as the card's performance, it's expected to come in a little ahead of the Radeon RX 5700 XT and GeForce GTX 1080 Ti. According to Moore's Law Is Dead, it will also be faster than NVIDIA's GeForce RTX 3060, which carries a $329 MSRP.
The hope is that AMD will end up pricing the Radeon RX 6600 XT at around $329 as well, and that might end up happening. However, the $399 figure is what people are hearing. If so, it will cost the same as the GeForce RTX 3060 Ti, in terms of MSRP, and that could be a tough sell.
Stayed tuned, we should have some concrete answers in a few weeks.