AMD has gone all-in with 7-nanometer manufacturing, with both its Zen 2 CPU and Navi GPU architectures being built on a 7nm node. And for the most part, the move to 7nm has served the company well. There is just one hiccup—a growing chorus of Radeon RX 5700 and Radeon RX 5700 XT owners are complaining of black screen issues.
This does not appear to be an issue with the node itself or any kind of faulty hardware, and instead is very likely tied to sloppy driver code. AMD has even acknowledged the issue in some of its Radeon Software Adrenalin 2020 Edition driver releases.
"Some Radeon RX 5700 series graphics users may intermittently experience a black screen while gaming or on desktop. A potential temporary workaround is disabling hardware acceleration in applications running in the background such as web browsers or Discord," AMD states in the release notes for its latest Adrenalin 20.2.1 driver release.

AMD overhauled its Adrenalin platform at the end of last year, and some of the earlier driver releases on the 2020 foundation contained a whole bunch of bug fixes. Things have slowed down lately, but there are still wrinkles in need of ironing. The intermittent black screen issues should be AMD's highest priority. Fortunately, it sounds like it is.

Over on Reddit, a product manager at AMD asked users who are affected by the issue to fill out a survey to narrow down the culprit, and hopefully fix the issue once and for all. 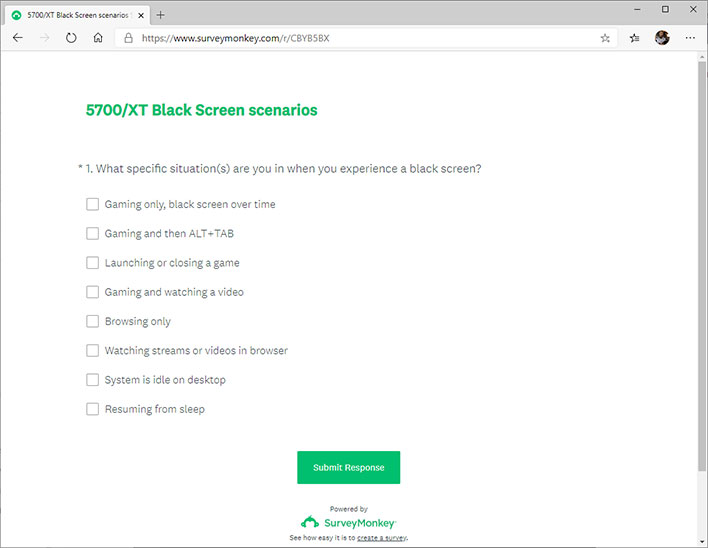 "We are very urgently working on fixing issues but to help us we need to understand in which different scenarios you are experiencing the problem, so I am looking for a very quick, less than a minute response on a survey to try and get a snapshot overview of what specifically you are doing if you see a black screen," the product manager states.
It's not clear how far reaching the problem exists. Looking through the thread, there are multiple anecdotes of black screen issues on cards other than just the Radeon RX 5700 series, including Radeon RX Vega (Vega) and Radeon RX 500 (Polaris) series cards.
The survey does not appear to take non-Radeon RX 5700 series into account. For the time being, AMD seems convinced the issue only relates to its higher level Navi cards, and nothing below the Radeon RX 5700. Whatever the case might be, here's hoping it is resolved soon.
Side note: If this was going to happen, it's better for AMD that it manifested now rather than closer to the launch of Sony's PlayStation 5 and Microsoft's Xbox Series X, both of which will feature a next-gen version of Navi under the hood. It's a different process, and of course the chip will be different, but unlike with PCs, users don't have the option of swapping out the GPU for a different make/model/brand.