AMD nearly doubled its revenue in the first quarter of 2021 compared to a year ago, earning more than $3.4 billion, up 93 percent compared to its Q1 revenue last year. The same goes for its net income, which jumped 94 percent year-over-year to $555 million. Further, a significant chunk of AMD's earnings came from more than doubling up its data center revenue.

"We had outstanding year-over-year revenue growth across all of our businesses and data center revenue more than doubled. Our increased full-year guidance highlights the strong growth we expect across our business based on increasing adoption of our high-performance computing products and expanding customer relationships," AMD CEO Dr. Lisa Su said in a statement.
AMD does not share specific data center figures, and instead lumps it in with its Enterprise, Embedded, and Semi-Custom segment, which also includes revenue from it dedicated game console chips, like the custom silicon found inside the Xbox Series X/S and PlayStation 5. Collective revenue from this segment skyrocketed from $348 million a year ago to more than $1.3 billion in Q1, a nearly fourfold increase.
Dr. Su's revelation that AMD more than doubled its data center earnings should worry Intel. It comes on the heels of AMD launching its EPYC 7003 series processors based on Zen 3, including the EPYC 7763, the "world's highest-performance server processor" with 64 cores and 128 threads of big iron to throw at workloads. 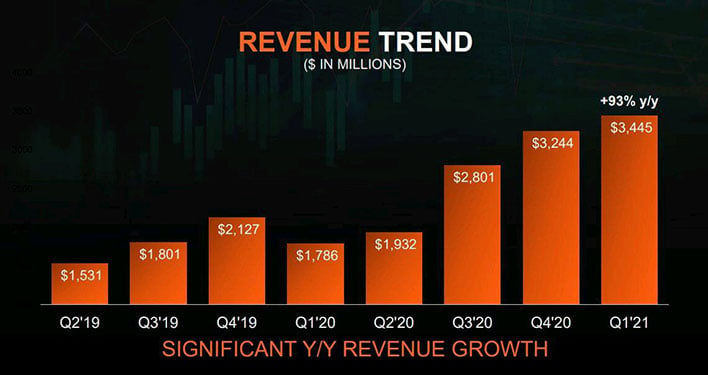 AMD has seen a fairly steady ascension in revenue growth over the past couple of years, which started before the pandemic. Dr. Su credited the strong Q1 performance to having the "best product portfolio in our history," as well as "strong execution and robust market demand." There is not much to argue there—Zen 3 is a formidable architecture, and it is offered across multiple product lines, including consumer desktops and laptops, and in the data  center.
We can only imagine what AMD's numbers might be like if there was not a global shortage of silicon. This has led to increased prices from opportunistic marketplace sellers, and even so, AMD's 12-core/24-thread Ryzen 9 5900X based on Zen 3 currently ranks as Amazon's second best selling CPU, despite an average selling price of around $860 (way up from its $549 suggested e-tailer pricing).
That chip falls into AMD's Computing and Graphics segment, which earned $2.1 billion in the first quarter, up 46 percent year-over-year and 7 percent sequentially. AMD's discrete graphics cards also fall into that category, including the Radeon RX 6000 series. The same goes for AMD's mobile processors, which has notched a sixth consecutive quarter of record revenue.
Looking ahead, AMD anticipates Q2 revenue to be around $3.6 billion, plus or minus $100 million, which would represent an 86 percent year-over-year increase and 4 percent sequential spike. And for the full year, AMD increased its guidance from 37 percent annual growth to 50 percent.
It seems reasonable to expect the good times will continue for AMD, especially in the short term—Intel's Rocket Lake launch isn't likely to move the needle in a meaningful manner, so Zen 3 should continue to be an attractive option for buyers, offering more cores (Rocket Lake tops at eight cores) and strong IPC performance. Further down the line, however, competition could kick up a notch when Intel launches its hybrid Alder Lake lineup, which will introduce DDR5 and PCI Express 5.0 support.
AMD will counter with Zen 4, and there is a rumor floating around that Zen 5 could be a hybrid design as well. So in essence, AMD can savor the moment before potentially finding itself is a dogfight with a reinvigorated Intel (assuming Pat Gelsinger and company can return Intel to its former glory).
We're also interested to see how AMD can perform in the graphics space. RDNA 2 is a solid architecture, but NVIDIA holds the performance crown with Ampere. AMD can lean on wins in the console space, but if we're looking further down the line, this could become a three horse race, with Intel entering the discrete GPU fray.
Overall, we feel good about where AMD is and where it is going, under the leadership of Dr. Su. It's now become a distant memory when we used to write about quarterly losses and underwhelming architectures, like Bulldozer, with alarming frequency. AMD is on much more solid footing these days, and is not showing any signs of slipping.