It hardly matters that it is nigh impossible to find a Ryzen 9 5900X both in stock and priced at (or even near) its MSRP of $549, the chip is still selling like hotcakes regardless. In fact, it is the second-best selling CPU on Amazon, behind only the previous generation (Zen 2) Ryzen 7 3700X. Should Intel be concerned about this? Let's unpack the situation.
The Ryzen 9 5900X is based on AMD's latest generation Zen 3 architecture. It is a 12-core/24-thread processor with a 3.7GHz base clock, 4.8GHz max boost clock, and 64MB of L3 cache, all wrapped in a 105W TDP. The suggested e-tailer pricing (SEP) is $549, but like AMD's flagship Ryzen 9 5950X, it has been difficult to find for anywhere near that amount.
Looking at the CPU's price history on Amazon (via CamelCamelCamel, which is an excellent resource for this sort of thing), the average selling price since it came out has been $859.48, with it hitting a high of $939.49, from third-party (marketplace) sellers. It's currently listed at $866.

In other words, the average selling price is around 57 percent higher than what it should be going for, but people are lining up to buy chip anyway. The allure of Zen 3 and 12 physical cores is not only enticing, being the second-best seller on Amazon despite a big pricing premium speaks to how desirable AMD's silicon is, compared to Intel's CPUs. 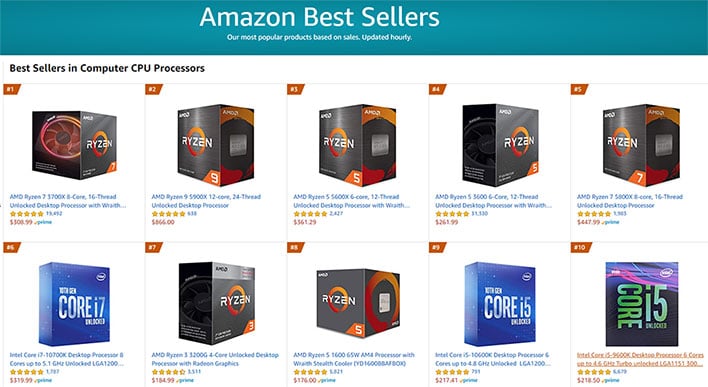 It's not just the Ryzen 9 5900X that is attracting buyers to team AMD, either. Out of the top 10 best selling CPUs on Amazon, seven of them are AMD Ryzen processors, and just three are Intel chips. Here they are in order...
What about Rocket Lake-S? Intel's 11th Gen Core i7-11700K occupies the No. 13 spot of Amazon's top selling CPUs, five spots below the Ryzen 5 1600 based on the original Zen architecture.
Fortunately for Intel, it is still making money hand-over-fist. Intel generated $19.7 billion in revenue last quarter, smashing earnings estimates in the midst of global chip shortage. Nevertheless, Intel CEO Pat Gelsinger recognizes there is much work to be done, in returning the company to its former glory.
"As the incoming CEO, I am just really thrilled that we have the opportunity to take this great icon of a company, this company that has been crucial to every aspect of technology, and have it be that leader again into the future," Gelsinger said when he stepped into the role as CEO, replacing Bob Swan.
It's no secret Intel has had some hiccups up to this point. The road to 10-nanometer has been bumpy, and a defect in its 7-nanometer chip design pushed things back as well. However, looking ahead, Intel is confident 7nm is back on track, and later this year it will launch its hybrid Alder Lake architecture, built on a 10nm SuperFin process.
How it all plays out remains to be seen, but one thing is for sure—this is a different AMD than the one Intel had gone up against in what now feels like the distant past.