As we stated in our Radeon RX 6900 XT review, this is a fast graphics card that essentially matches the GeForce RTX 3090 in rasterized games (it depends on the title, obviously). It's a beast for sure. However, it could be utterly slow by comparison if the latest Navi 31 rumor ends up being true. If so, AMD's next-generation flagship could end up more than twice as fast as its current top offering for gamers.
There's a lot happening at AMD right now. It's getting ready to refresh its top three Radeon RX 6000 series cards with the Radeon RX 6950 XT, 6850 XT, and 6750 XT. The upcoming cards are still based on the RDNA 2 architecture, but are said to feature faster GDDR6 memory (18Gbps versus 16Gbps). It's possible the clocks could be higher too, but we'll have to wait and see.
So there are some performance uplifts on the near-time horizon. albeit minor ones in all likelihood. The arrival of AMD's next-generation RDNA 3 architecture and a new stack of Navi GPUs could be big game changers, though.
The top part in the next-gen stack will be Navi 31. In a new video posted to YouTube, leaker Moore's Law Is Dead claims to have confirmed that Navi 31 will leverage multiple dies, giving it a "major advantage over [Ada] Lovelace," which is the codename for NVIDIA's next-generation GPU architecture for the presumed GeForce RTX 40 series. 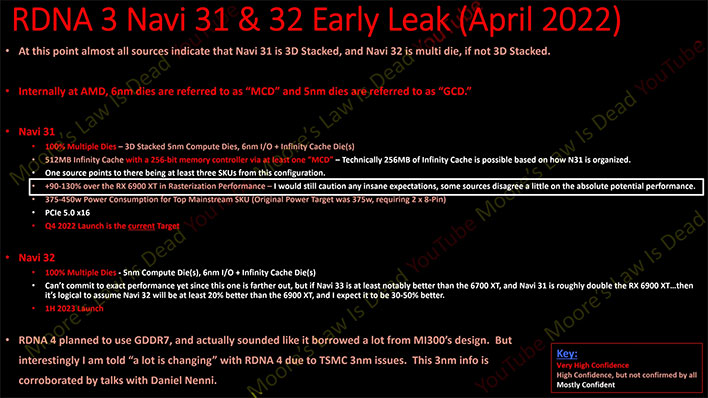 It's also said these will most likely consist of 3D stacked 5-nanometer compute dies on top of a 6-nanometer I/O and Infinity Cache dies. He reckons Navi 31 will probably arrive with 512MB of Infinity Cache and "for sure a 256-bit memory controller via at least one MCD." But the real kicker is this—the performance is claimed to be 90-130% over the Radeon RX 6900 XT.
He mentions AMD segmented Navi 31 into three SKUs, and if there is a product that essentially doubles the performance over the current flagship, it would undoubtedly be the Radeon RX 7900 XT (or whatever that card ends up being called). This is for rasterization, not real-time ray tracing, by the way.

It's supposedly more efficient than what NVIDIA is rumored to be doing with Ada Lovelace, too. As in, 375W to 450W power consumption for the top consumer SKU. There's chatter of NVIDIA's next flagship being a 600W or 800W card, and that it's even toying around with a 900W card.
Will it actually work out that way? We'll see—regarding Navi 31, the time frame is still said to be Q4 of this year, which would put its release sometime from October to December. Then in the first half of next year, Navi 32 will arrive. And looking even further down the road, it's said RDNA 4 will implement GDDR7 memory, though things could change because of supposed issues with 3nm.
As always, we have to take rumors and leaks with a block of salt. That said, if you have about a half hour to spare, you can check out the full video to get your GPU rumor fix for the week.