AMD has released a new online GPU comparison tool and it less biased than you might think. Yes, that totally sounds like a backhanded compliment, but we don't actually mean it that way. As any fellow geek can attest, we tend to be a jaded bunch when it comes to a manufacturer's own benchmark data and claims. But in an effort for "full transparency," AMD's graphs comparing Radeon RX 6000 and GeForce RTX 30 series graphics tilt in both directions, depending on the game.
There are some nuances that we'll discuss, but at a high level overview, the comparison tool presents four pull down menus to help users compare graphics cards from both companies. They include "Game Title," "Screen Resolution," "Setting," and "API," each of which is self-explanatory. 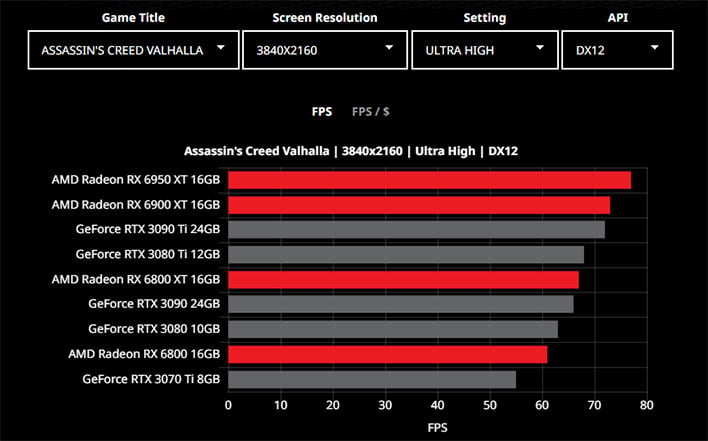 When you make your selections, a graph below is updated in real time with AMD's own benchmark figures, and you can toggle between "FPS" and "FPS/$" comparisons.
"All performance numbers have been generated and verified by testing in AMD internal labs," AMD explains.
There are 11 popular games to compare. Several of them are what we would consider to be 'AMD friendly' such as Assassin's Creed Valhalla, Resident Evil Village, and Forza Horizon 5. So you could argue that there is actually some bias in the game selections, but they don't always favor AMD over NVIDIA in the provided benchmarks. 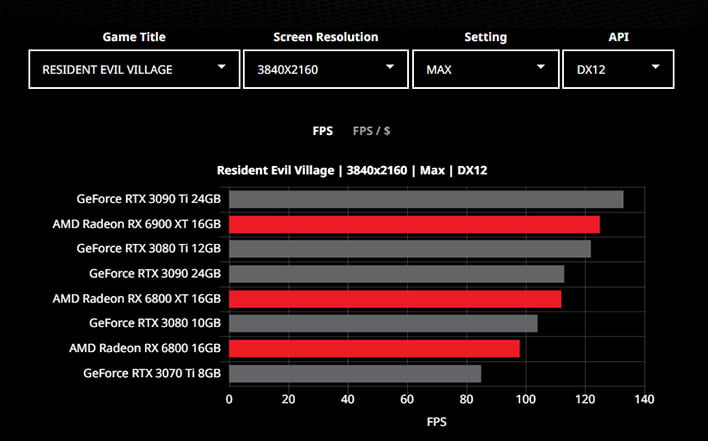 As to those nuances, the roundup of cards is not consistent across all the pull-down options. If you drop down to 1920x1080, it's a smaller selection of GPUs in the mid-range and lower end segments. To be fair, gamers considering a Radeon RX 6950 XT-tier GPU probably have higher resolution gameplay in mind, like 4K or 1440p. Still, it'd be nice if AMD fleshed those graphs out.
There's also no evaluation of ray tracing performance, which generally favors NVIDIA's GPUs, or upscaling technologies (DLSS and FSR). That means users are not getting a complete picture of performance or performance per dollar.
That's all to say, this tool is not a substitute for independent reviews with broader analysis. However, AMD deserves kudos for the level of transparency on display here, as it could have aggressively cherry picked the data to only or mostly favor its own GPUs. It didn't go in that direction.