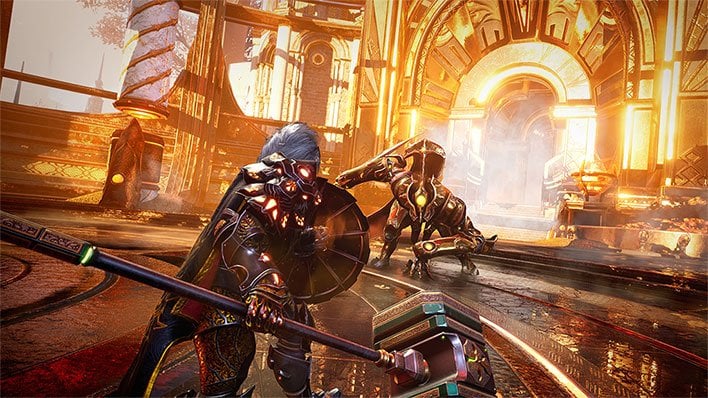 Godfall launched last week for PC, and as we reported earlier this month, the game didn't come with real time ray tracing effects enabled by default. While disappointing to gamers that wanted to get the best visuals fresh out of the box on launch day, we've got some good news and bad news for you regarding ray tracing within the game.

The good news is that ray tracing is now available in Godfall with the 2.0.95 Update which went live today. The bad news, however, is that it is only available at the moment for AMD Radeon RX 6000 Series graphics cards.

This is a rather interesting and unfortunate turn of events, given that Godfall is using Unreal Engine 4 and leverages the DirectX 12 Ultimate API. Now granted, AMD has been working very closely with developer Counterplay Games on Godfall, so we would expect some kind of deference to AMD GPUs. But considering that DirectX 12 Ultimate should technically support real time ray tracing on both Radeon RX 6000 and GeForce RTX 20/30 hardware, this exclusion is definitely a head scratcher.

Counterplay Games is only saying that, "Ray tracing using NVIDIA GPUs will come with a future update."

This also comes shortly after AMD made a big deal about using industry-backed standards for real-time ray tracing. "AMD will support all ray tracing titles using industry-based standards, including the Microsoft DXR API and the upcoming Vulkan raytracing API," said AMD in a statement earlier this month. "Games making of use of proprietary raytracing APIs and extensions will not be supported."