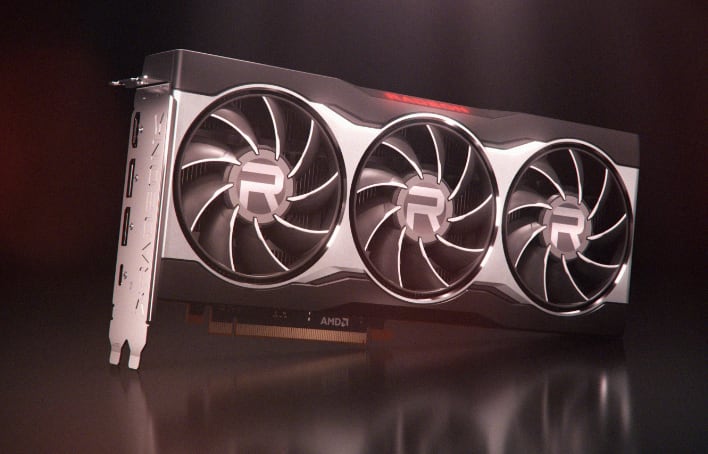 NVIDIA has supported real-time ray tracing in games for over two years now, starting first with the GeForce RTX 20 Series (Turing), and now with it current-generation GeForce RTX 30 Series (Ampere). AMD is just starting to get into the mix with the [not yet released] Radeon RX 6000 Series, and we're now getting an idea of how it ray tracing support will factor in with the cards.

According to an AMD representative speaking to AdoredTV, the Radeon RX 6000 will only support ray tracing using industry-backed standards, and that means existing APIs like Microsoft DirectX Raytracing (DXR) and Vulkan Raytracing. The AMD statement reads:

AMD will support all ray tracing titles using industry-based standards, including the Microsoft DXR API and the upcoming Vulkan raytracing API. Games making of use of proprietary raytracing APIs and extensions will not be supported.

In other words, we don't expect AMD to be supporting NVIDIA-backed ray tracing extensions that you would find in pet projects like Quake II RTX or games like Wolfenstein: Youngblood. However, AMD has every opportunity to use the same extensions — as they are not locked to NVIDIA hardware — and even Intel is considering backing them for its Xe graphics architecture. However, AMD's Radeon RX 6000 graphics cards should have no trouble running Microsoft DXR titles including games like Fortnite, Cyberpunk 2077, Watch Dogs: Legion, and about a dozen others games.

At this point, we've not seen any meaningful and official performance numbers from AMD on ray tracing performance for the Radeon RX 6000 family. AMD might simply want to hold its cards close to the vest, or perhaps performance with its RT hardware isn't quite up to snuff yet given that this is the company's first-generation offering (after all, NVIDIA has had two years to optimize its drivers). Whatever the case, we'll definitely be putting the cards through the paces with ray tracing titles once we get them in our labs.

Updated 11/6/2020
NVIDIA reached out to offer more insight on its ray tracing support for the Vulkan API, and industry standard APIs in general. The following is a statement from our NVIDIA contact and spokeperson: