Developers are making a big deal about "next-gen gaming," in large part because the Xbox Series X/S and PlayStation 5 are about to hit. Likewise, on PC we have new graphics card launches from AMD (Radeon RX 6000 series) and NVIDIA (GeForce RTX 30 series). One of the upcoming games that will attempt to make use of next-gen GPU goodness is Godfall, and the system requirements have been revealed.
Godfall is based on Unreal Engine 4 running on the DirectX 12 Ultimate API, which it means it takes advantage of cutting edge graphics technologies like real-time ray tracing and variable rate shading. The better your hardware (and especially your GPU), the better the game will look, depending on the settings your PC can handle.
Here is what we are looking at... 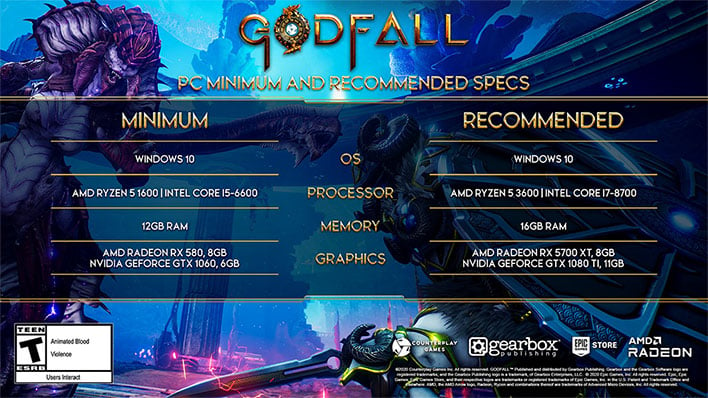 Lee notes that running at 4K "requirements tremendous memory bandwidth" for smooth gameplay. In the video above, there's a scene with 4K by 4K textures gobbling up 12GB of graphics memory. This is a point AMD is eager to drive home, considering that the Radeon RX 6800, 6800 XT, and 6900 XT each has 16GB of GDDR6 memory.

He also talked about how the Infinity Cache on AMD's Radeon RX 6000 graphics cards can enable high framerates at maximum settings, and sustain them.
"We've also overhauled our lighting and shadowing systems, leveraging DXR 1.1 ray tracing to realistically model shadows more closely to what happens in the real world. Of course, ray tracing shadows involves incredibly complex computations, and the Radeon RX 6000 Series GPUs are able to handle them with ease. Moreover, we've enabled Fidelity FX Contrast Adaptive Sharpening to sharpen and improve the overall textures and edges of our scenes," Lee says.
It's obviously a very AMD-friendly promo. And that said, it will be interesting to see how NVIDIA's higher-end GPUs fare at 4K in Godfall. Bear in mind that the GeForce RTX 3080 has 10GB of GDDR6X memory, which is 2GB less than what Lee says is needed for 4K at Ultra settings.
For anyone who is interested, Godfall is available to pre-order now starting at $60. It releases on November 12.