AMD has been making some steady gains in desktop market share with its Ryzen 3000 processors, and has even showed some great promise with its newly released Ryzen 4000 mobile processors. But another segment that is incredibly crucial to AMD with respect to margins is the server market.

Intel has long been a dominant force in this sector, but AMD is two generations in with EPYC, and is in a stronger position than it has been in years. Zen 2-based EPYC 7002 processors have already been gaining attention from customers with configurations topping out with 64 cores/128 threads and today, AMD is introducing three new EPYC 7Fx2 Series processors that look to put even more pressure on Intel's Xeon family.

The new processors include the 8-core/16-thread EPYC 7F32, 16-core/32-thread EPYC 7F52, and the 24-core/48-thread EPYC 7F72. What makes these processors so special compared to their more plebeian EPYC 7002 counterparts is that they offer up to a 500Hz uplift in base clocks (and some appreciable gains in boost clocks).

“AMD EPYC continues to redefine the modern data center, and with the addition of three powerful new processors we are enabling our customers to unlock even better outcomes at the heart of the enterprise market,” said Dan McNamara, senior vice president and general manager for AMD’s server business unit. “With our trusted partners, together we are pushing the limits of per core performance and value in hyperconverged infrastructure, commercial HPC and relational database workloads.” 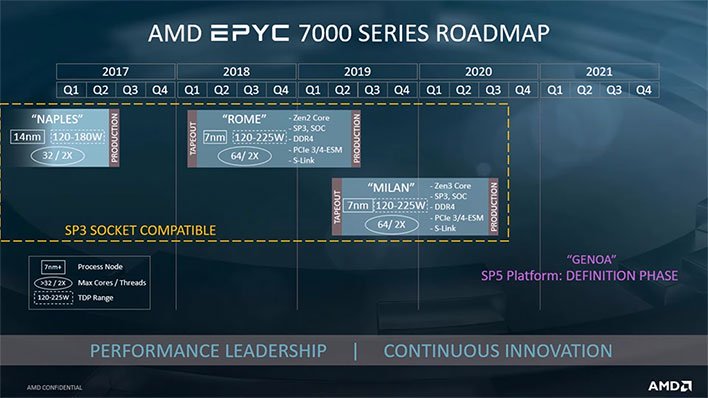 AMD already has a number of big-name customers lined up who are adopting its new EPYC 7Fx2 processors, including Dell, Hewlett-Packard, Microsoft, IBM, Lenovo, and Supermicro (among others).

It remains to be seen if this will be the "last hurrah" for AMD's Zen 2-based EPYC 7002 family. Next on the roadmap for AMD is its Zen 3-based EPYC 7003 family, which uses a refined 7nm process node. The first of these EPYC 7003 "Milan" processors are already sampling and are expected to officially launch later this year.