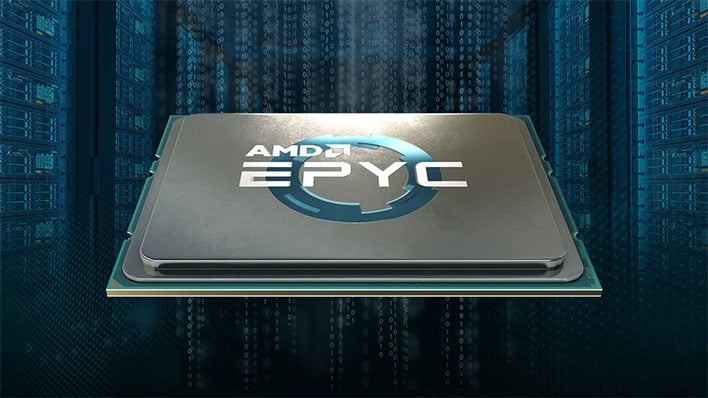 Advanced Micro Devices is about to put another feather in its cap, that being double-digit market share in the lucrative data center market. Speaking at the USB Global Tech Conference, Ruth Cotter, senior vice president of marketing at AMD, said the expectation is the latest EPYC "Rome" processors will push the company to a 10 percent share by the second quarter of 2020.
This would be a tremendous achievement, though still well short of historical levels, which AMD said was around 26 percent. At present, AMD is about about a 7 percent share. Cotter says getting to 10 percent would give AMD credibility in being able to soar back to historical levels.

"Our target is to get to 10 percent share by the second quarter of 2020. In doing that, we used Naples as sort of the first generation to really regain our reputation to launch our multi-generational roadmap into the marketplace, build out the ecosystem, get a nice pipeline in place and sort of drive qualification cycles that were necessary within the customer base," Cotter said.
Having done that, Cotter says AMD has a "very even seat at the table" with Rome, along with some "really nice wins and positioning across HPCs, cloud, and enterprise."
AMD's second-generation EPYC Rome processors are based on the company's third-generation Zen 2 CPU architecture, the same that powers its Ryzen 3000 series of desktop chips and latest Threadripper processors. Zen in general has been nothing but great for AMD's comeback act, and its latest generation silicon has it positioned to win market share in key categories.
It's not just the data center market, either. Data shared by Mindfactory, one of the biggest computer hardware retailers in Germany, has consistently shown Ryzen CPUs outselling Intel's Core CPUs. In addition, the top 10 best selling processors on Amazon are all Ryzen CPUs (up from eight of 10 just a couple of weeks ago).
Intel knows it's in for a dogfight, despite still dominating overall. Back in September, Intel acknowledged it conceded "some desktop share" to AMD, while vowing to "aggressively compete in all segments."
As it pertains to the server market, Cotter says the qualification cycle for Rome should be more efficient than last time. Though it was not stated, part of the reason is because Rome CPUs can be easily installed into last-gen platforms, to replace Naples.
"So we feel well positioned," Cotter said, for which AMD will get no argument from us.