Expectations for 2022 are already high in the hardware world. We're expecting to see new CPUs and GPUs from all three of the biggest players in the PC market: Intel, NVIDIA, and of course AMD. Before that happens, though, we might just see a last gasp from Socket AM4 and AMD's RDNA 2 architecture on the desktop.


The usual rumor-mongers are reporting that AMD has updates to both its Ryzen processor lines and its Radeon graphics chips on the way. On the CPU side of things, the story originates with MEGAsizeGPU (@Zed__Wang on Twitter), who says that we'll be seeing not just one but four new CPUs from AMD this month. 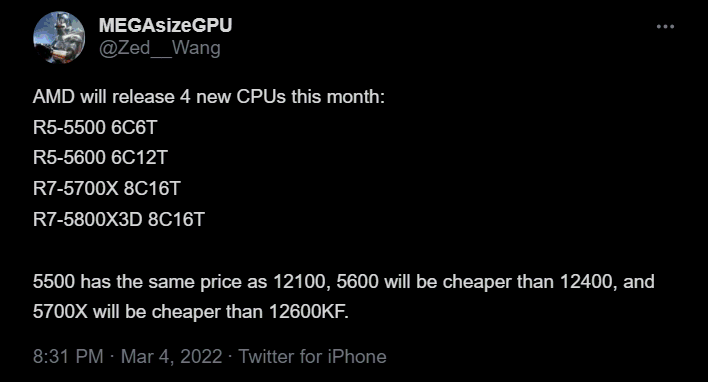 If the leaker's information is accurate, the Ryzen 7 5700X will be an 8-core, 16-thread chip, presumably with lower clock rates than the extant Ryzen 7 5800 and 5800X models. The Ryzen 5 5600 will supposedly be a six-core, 12-thread chip just like its "X" model, and the Ryzen 5 5500 will apparently be a six-core, six-thread CPU. If true, this would be the first Zen 3 processor to ship without SMT support. 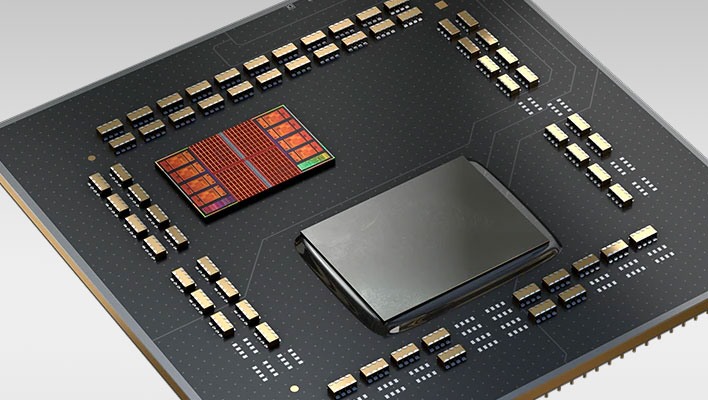 It's worth noting that we're not familiar with MEGAsizeGPU, so this claim could originate entirely from their imagination. However, the model numbers more-or-less line up with their expected specifications, and the pricing makes sense in light of Intel's aggressive 12th-generation CPU pricing. Only time will tell, we suppose.


Over on the GPU side of things, the information comes from a source much more familiar. Frequent Chinese leaker "热心市民描边怪", most commonly translated as "Enthusiastic Citizens", made a post on the ChipHell forums claiming that AMD will launch "-50" versions of the Radeon RX 6900 XT, RX 6700 XT, and RX 6600 XT by April 21st. Those cards, then, would be called Radeon RX 6950 XT, Radeon RX 6750 XT, and Radeon RX 6650 XT.

The post has since been blanked, but we retrieved it using the Wayback Machine. In his original post, Mr. Citizens claimed that the cards would be slightly more expensive than the current versions, and that the main differences would be a slight bump in core clock as well as an upgrade to 18-Gbps GDDR6 memory. All of the extant versions of those cards are using GDDR6 memory clocked at 16 Gbps, so this would be a 12.5% bump in memory bandwidth over the current versions.


While that's a significant improvement, remember that recent Radeons are much less constrained by their main memory bandwidth thanks to their large "Infinity Cache." It seems likely to us that such a change will indeed result in a small performance bump over the previous versions, and so the leaker's claim that they will be "slightly" more expensive seems reasonable. It's even possible that these models will replace the previous models because AMD finds it harder to source the older 16 Gbps GDDR6 memory now.
Enthusiastic Citizens also claimed that the Radeon RX 6400, currently available only to OEM customers, would find its way to the retail channel at the same time. This is an even lower-spec'd version of the Radeon RX 6500 XT, which we (and many other reviewers) found slightly disappointing given its price point. Still, it would be nice to have sub-$150 GPUs on the market using modern process technology.

Both of these rumors are about upcoming products purportedly arriving within the next six weeks, so we don't have too much longer to wait before we know if they're real. Naturally, we'll let you know as soon as we know.