You can bet your bottom dollar that more Alder Lake CPUs are coming. We don't have confirmation on what the full stack (or a fleshed out stack) might look like yet but if past and present leaks are on the money, the Core i5-12400 will be one of them. One of the newest benchmark leaks hints it could give the Ryzen 5 5600X some serious competition in the bang-for-buck space.
There are caveats that go along with that suggestion but before we get to those, let's go over the Core i5-12400's presumed specifications and leaked performance data. While Alder Lake is making waves for its hybrid design, the Core i5-12400 will purportedly roll solo with Golden Cove cores—it's said to feature six of them with Hyper Threading support, for a traditional 6-core/12-thread makeup without any efficiency cores (Gracemont).
It's further been suggested the chip will debut with a 2.5GHz base clock and a 4.4GHz max Turbo frequency (4GHz across all six cores) and a 65W TDP.
The unannounced processor has made a cameo at PugetBench. According to the database entry, it was surrounded by an ASRock Z690 Extreme WiFi 6E motherboard, 16GB (2x8GB) of rather slow DDR4-2400 RAM, a GeForce RTX 3060 Ti graphics card, and Windows 10. 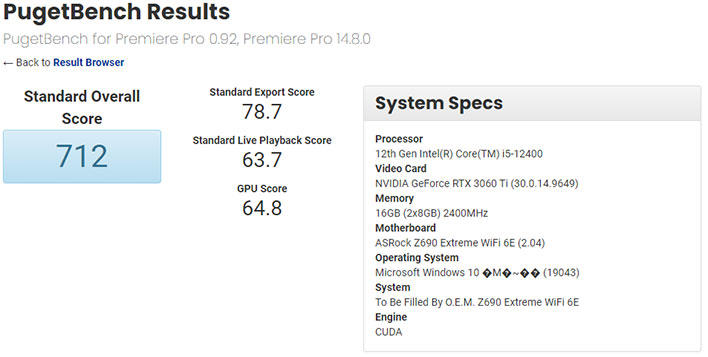 As configured it posed an Overall score of 712. Broken down by individual tests, posted a 78.7 Standard Export score, 63.7 Standard Live Playback score, and a 64.8 GPU score.
For reference, here's a look a similarly configured AMD Ryzen 5 5600X system running the same test... 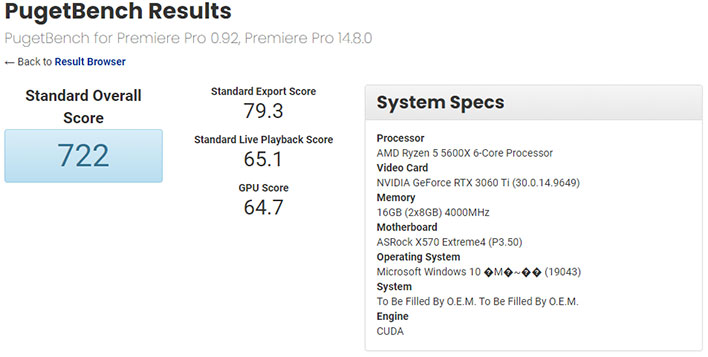 AMD's Ryzen 5 5600X edges out the Core i5-12400 by 0.76 to 2.2 percent (and 1.4 percent overall). It's a virtual tie, though the Ryzen part gets the technical victory.
It's possible that faster memory would close the minuscule gap and/or put the Alder Lake CPU slightly ahead of AMD's chip. Same goes for running the benchmark in Windows 11, even though the Core i5-12400 lacks any E-cores (there are still OS-bound gains to be had).

Whatever the case might be, it's looking like the Core i5-12400 and Ryzen 5 5600X will perform similarly to one another. So then the discussions pivots to pricing. Intel's lowest recommended customer pricing (RCP) for Alder Lake so far is $264 for the Core i5-12600KF. We can assume the Core i5-12400 will be somewhere south of that.
The Ryzen 5 5600X, meanwhile, commands $299 on Amazon right now. Best guess is the Core i5-12400 ends up being around $50 cheaper, maybe more. That doesn't take into account the cost of a motherboard, an important factor since Intel so far has only launched its high-end Z690 chipset. The least expensive model right now is MSI's Pro Z690-A with DDR4 slots, priced at $220. In contrast, even some X570 boards can be found for around $120, and that's AMD's top chipet.

There's also the price premium on DDR5 memory if choosing to go that route, which requires a more expensive motherboard. Looking at the platform as a whole, the bang-for-buck factor quickly swings back towards AMD.
It will be interesting to see how things play out over time, though. Eventually there will be more affordable Alder Lake motherboards, and we hope DDR5 will come down in price too. At the same time, don't be surprised if AMD and its retail partners continue to adjust the price of Zen 3, especially when Zen 3+ debuts. That's all to say, plucking the bang-for-crown from AMD won't be easy, even with a less expensive CPU.