Would you trade the ability to easily overclock a CPU for a stash of additional cache and the performance benefits that come with it? It's a question enthusiasts may answer when AMD ships its upcoming Ryzen 7 5800X3D. Announced at CES, the Ryzen 7 5800X3D is presumably nearing release, and rumor has it the chip will not support overclocking.
If true, that's a stark departure from the Ryzen desktop chips that came before it, including the regular Ryzen 7 5800X without the additional cache piled onto the chip. Same goes for the Ryzen 9 5950X, Ryzen 9 5900X, Ryzen 7 5800X, Ryzen 5 5600X, and also the Ryzen 7 5700G and Ryzen 5 5600G. All are based on Zen 3, and each SKU features an unlocked multiplier. 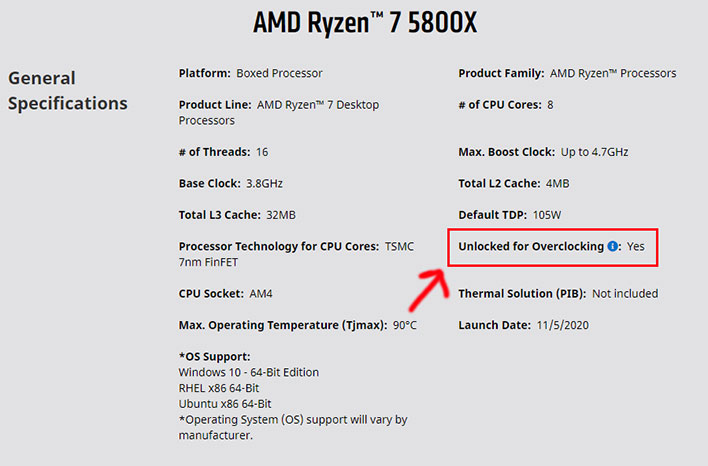 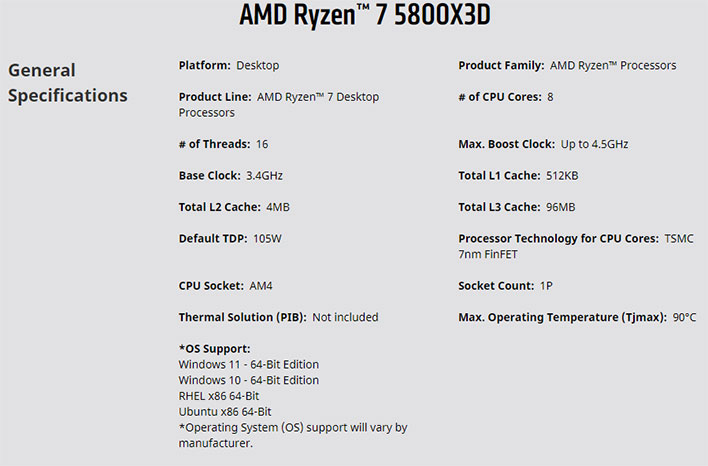 That latter tidbit is curiously missing from the Ryzen 7 5800X3D's product page on AMD's website. An oversight, perhaps? Probably not. 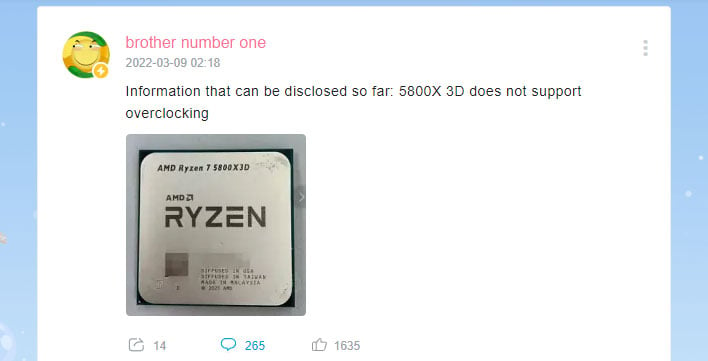 A user on the Bilibili forum posted a picture of purports to be a shipping sample and claims the upcoming CPU "does not support overclocking." Additionally, the folks from TechPowerUp say they've been told by motherboard makers that AMD asked them disable support for overclocking within the BIOS for the Ryzen 7 5800X3D.
"When we asked for a reason as to why this was the case, we were told that AMD was keeping that information to themselves for the time being," TPU noted.
AMD talked about transitioning to 3D V-cache packaging last summer, at the time referring to it as the most advanced and flexible active-on-active stacking technology in the world. It's claimed this will deliver a 15 percent performance uplift in some applications, and specifically games. If so, that's about on par with the kind of gains we typically see with generational architecture upgrades.
The Ryzen 7 5800X3D will be the first consumer chip from AMD to leverage 3D V-cache. It comes with an additional 64MB of L3 cache bolted on, for a total of 96MB versus 32MB on the Ryzen 7 5800X. Both are 8-core/16-thread CPUs based on Zen 3, though the Ryzen 7 5800X3D is clocked at a little lower at 3.4GHz (base) to 4.5GHz (max boost), compared to 3.8GHz (base) to 4.7GHz (max boost) on the Ryzen 7 5800X.
It would be tempting to overclock the Ryzen 7 5800X3D to make up the difference in clock speeds, if the chip could handle it. Unless a motherboard maker goes rogue, we might not find out.