For the past month, more information has been leaking out regarding AMD’s Matisse Refresh Ryzen 3000XT processors. Based on the information that we’ve gleaned from our previous reporting, AMD is set to launch the Ryzen 5 3600XT, Ryzen 7 3800XT, and Ryzen 9 3900XT with higher clocks their non-XT counterparts to battle Intel’s new Comet Lake-S family,

The latest bit of news that points to the impending release of these new Matisse Refresh processors comes from the Amazon’s Italian language website. The site featured product listings for both the Ryzen 5 3600XT and Ryzen 9 3900XT, however, there was no listing found for the Ryzen 7 3800XT. 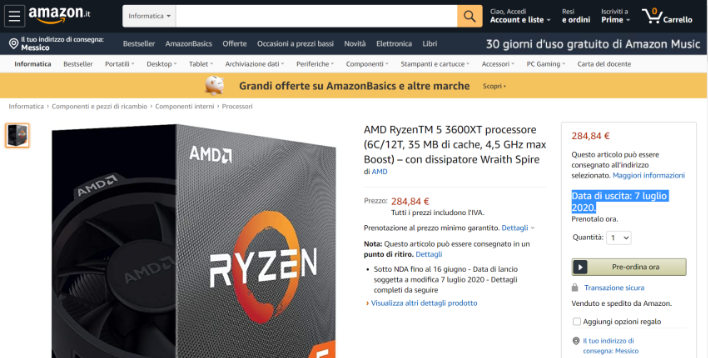 The Ryzen 5 3600XT retains the 6-core/12-thread configuration of the Ryzen 5 3600, but increases the maximum boost clock from 4.4GHz to 4.5GHz according to the product listing (which has since been removed). Likewise, the Ryzen 9 3900XT also gets a 100MHz boost in its boost frequency from 4.6GHz to 4.7GHz.

Unfortunately, there are no references to base clocks, although we’d imagine that those would be increased as well. It should also be noted that the listings allege that AMD will announce the new processors on June 16th and that they will be available to purchase on July 7th. 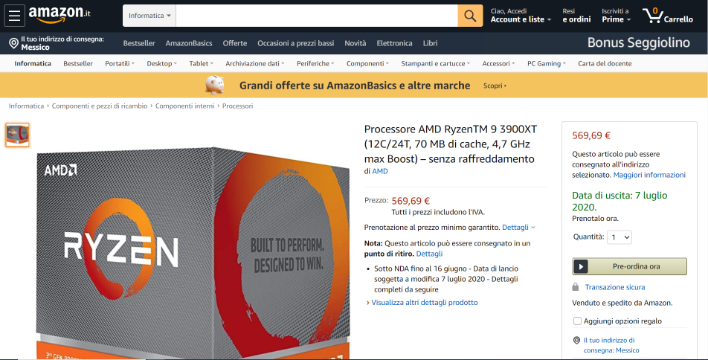 Previous benchmark leaks of the Ryzen 5 3600XT and Ryzen 9 3900XT have shown some strong performance gains, and there have been other benchmarks sprinkled online over the past few weeks that paint a clearer picture of what to expect when these refreshed processors launch.

It’s been rumored that the new “XT” processors will launch at the same price points as their predecessors, which should result in some excellent deals for those that don’t mind purchasing the older, less performant parts. The launch will also definitely put Intel on its toes as the company will not only have to contend with the XT processors, but the incoming Ryzen 4000 (Zen 3) desktop processors due later this year.