Amazon's most affordable Android tablet just got upgraded. The retooled Fire 7 (and Fire 7 Kids Edition) is also a little bit pricier than before (more on that in a moment), though it still falls into budget territory, coming in far cheaper than something like Apple's iPad Mini and is about half the price as Samsung's Galaxy Tab A7.
There are actually several notable upgrades on tap. One of those is a beefier quad-core processor that, according Amazon, is 30 percent faster than the previous generation Fire 7 tablet. Based on clock speed alone, Amazon is actually underselling the jump—the specs show it's now clocked a 2GHz, which is a 53 percent increase over the 1.3GHz clock on the previous model. It's not clear what exact SoC is inside this thing, though. 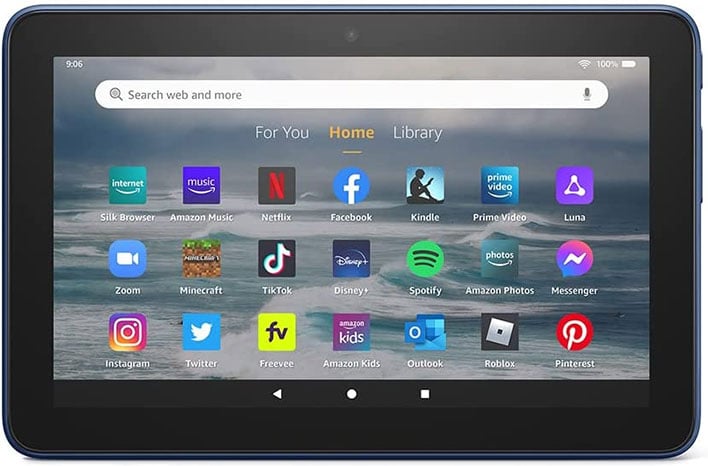 Amazon also doubled the RAM to 2GB "so you can quickly get back to your game or jump between apps," and boosted the battery life by 40 percent—it's rated to last up to 10 hours of browsing, watching videos, and so forth. Again, our math shows Amazon is being slightly modest here, as going from 7 hours to 10 hours is around a 43 percent improvement (assuming the battery life claims hold true, of course).

The other notable upgrade is Amazon swapped out the micro-USB charging port for a USB-C connector. That's a welcome upgrade, particularly as more PCs and Macs embrace the more modern connector type.
As for the display, Amazon kept the resolution at 1024x600 (171 ppi), as that is one of the main differentiators between the Fire 7 and the Fire HD 8 (1280x800, 189 ppi) and Fire HD 10 (1920x1200, 224 ppi). And once again, users are looking at 2MP cameras on the front and back.
Amazon has set the price at $59.99 for the 16GB model and $79.99 for the 32GB model, or $74.99 and $94.99, respectively, to banish the lockscreen ads. It boils down to a $10 increase across the board over the previous model.
The refreshed Fire 7 tablet is available to preorder now in Black, Denim, and Rose color options and will release on June 29, 2022. Likewise, the Fire 7 Kids is available to preorder, priced at $109.99 for the 16GB model and $129.99 for the 32GB model. The Kids version includes a 1-year subscription to Amazon Kids+ and is backed by a 2-year "worry free" warranty, meaning Amazon will replace the tablet if it physically breaks.