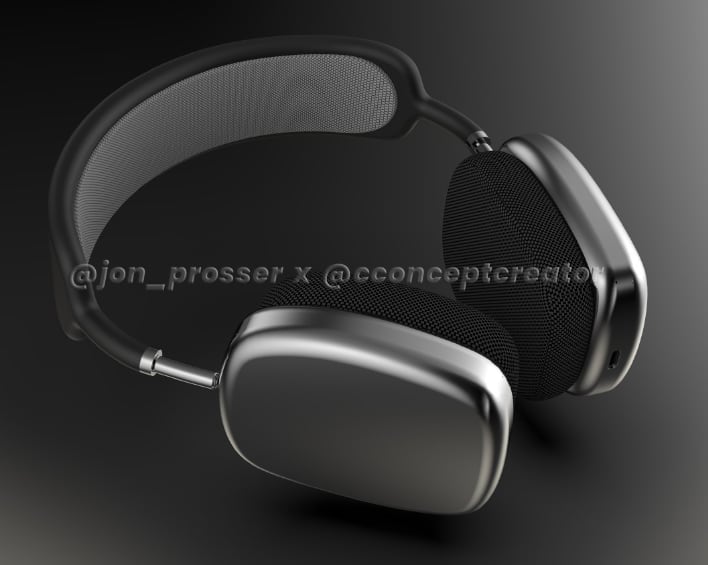 There have been rumors for months that Apple is set to launch premium over-the-ear headphones this year called the AirPods Studio. Although we haven't heard much by way of specifications for the AirPods Studio since then, the rumors have yet to slow down. Today, leaker Jon Prosser is throwing more fuel on the fire with both conceptual renders of the AirPods Studio and some alleged features.

Although we can't say for sure if the AirPods Studio will end up looking like these renders, this is the closest approximation based on Prosser's sources. We see rounded, rectangular ear cups that are supposedly constructed of metal, along with high-quality leather for the headband. The AirPods Studio, which reportedly carry the internal designation B515, include a bevy of sensors that can determine which way your head is oriented so that you don't need to worry about which side ear cups are left or right. Instead, the AirPods Studio would just simply know which way you are wearing them and switch audio channels automatically.

Given Apple's reluctance to use headphone jacks these days, you won't find one on the AirPods Studio. Instead, you'll find a solitary USB-C port that will be used for recharging rather than the Lightning port that is included on the charging case for AirPods and AirPods Pro. As an aside, it would be great if Apple could simply consolidate all of its devices to connect/charge with USB-C versus Lightning. As of now, Apple takes a scattershot approach with devices using one or the other. Even during yesterday's big announcement, the iPad Air was announced with a USB-C port (like the iPad Pro), while the new iPad carries on with the legacy Lighting connector. The iPhone 12 family is also rumored to use Lightning, which is another frustrating exercise in Apple's inability to stick to one port, but we digress...

At this point, we’re expecting Apple to announce the AirPods Studio at next month’s iPhone 12 event and we’d have to assume that pricing will come in $299 or higher (the AirPods Pro have an MSRP of $249).