Much has been made of next-generation platforms on the horizon from AMD and Intel. Both are planning to embrace DDR5 memory, the former with its Zen 4 platform and the latter with Alder Lake-S. Along with supporting new features and technologies. Zen 4 and Alder Lake-S will introduce new socket designs, and leaked images and renders allow us to compare the two.
It's expected that Alder Lake-S will arrive first, with a launch rumored for November. Alder Lake-S will leverage Intel's enhanced 10-nanometer SuperFin manufacturing process, along with jamming high performance cores with power efficient cores into the same package, for a heterogeneous design similar in concept to Arm's big.LITTLE approach.
Recently design schematics highlighted a new LGA 1700 socket for Alder Lake-S. As the name suggests, it features 1,700 pins. If the rumor is true, however, today's cooler might not be compatible with the new socket, because Intel is said to have altered the hole patterns for the screws and backplates by a few millimeters, and changed the height.
Meanwhile, AMD is supposedly moving to an LGA 1718 socket with 1,718 pins. It is an interesting shift because it will be the first Zen product to move away from a pin grid array (PGA) package to a land grid array (LGA) socket. That means no more fiddling with bent pins on the processor itself (just be careful with the pins in the actual socket). 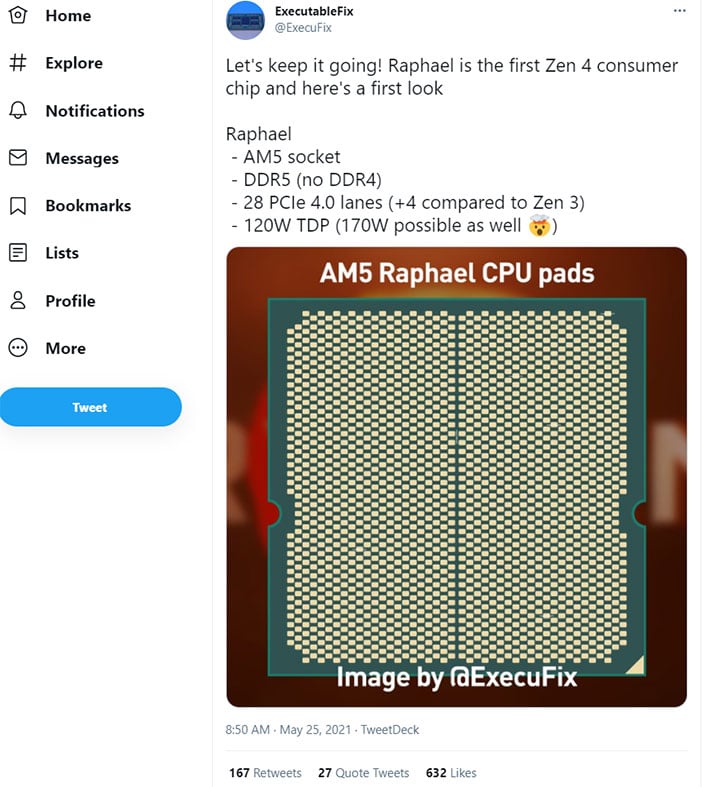 A leaker on Twitter posted a render of what the bottom side of a Zen 4 desktop processor (Raphael) will look like, and reiterated that AMD's next-gen CPUs will feature an AM5 socket with an LGA design. They also claim that Zen 4 will be DDR5 only, as opposed to Alder Lake-S, which will support both DDR5 and DDR4 memory (just not in the same motherboard).
It's further stated that Zen 4 will serve up 28 PCI Express 4.0 lanes, which is four more than Zen 3, and check in at 120W TDP, with 170W being possible. We'll see. 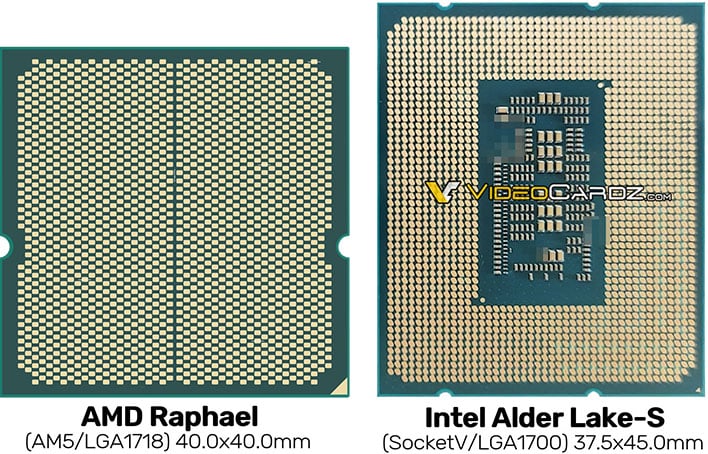 Incidentally, a leaked photo of Alder Lake-S and its bottom side allows for a neat side-by-side comparison between it and Zen 4. Rumored measurements allow the comparison to be done at relative scale—Zen 4 CPUs are said to measure 40 by 40 millimeters, while Alder Lake-S is said to measure 37.5 by 45 millimeters.
As has been stated before, Alder Lake-S will be a longer CPU that takes on a more rectangular shape, rather than square shaped. The opposite is true for Zen 4, as we can see in the comparison above.
Which one will prove to be the better option? It's far too early to tell, as it will be several months before the first launch takes place, and perhaps several more after that for Zen 4 to arrive. Until then, expect the barrage of leaks and rumors to keep coming.