Next-generation DDR5 memory is not even out in earnest yet for consumers, but that has not stopped Adata from pursuing overclocking records...with its own RAM, of course. Adata has taken one of its 16GB DDR5 memory kits that is rated to run at 4,800 MT/s, and overclocked it to 8,118 MT/s. Not too shabby, eh?
The kudos really belong to Adata's XPG division. Same company, but you can think of XPG being to Adata as Republic of Gamers (ROG) is to ASUS, if that makes sense. That being the case, the press release praises "XGP's know-how and expertise in pushing memory modules to their full potential" with this "record-breaking milestone."
That is indeed and boisterous overclock beyond the stock specification. At stock settings, the DDR5-4800 memory module adheres to where JEDEC anticipates initial kits launching at, but where's the fun in that? As we have seen in DDR4 territory, memory makers will inevitably push RAM products above JEDEC's formal specifications, the only question is, how fast will they go? 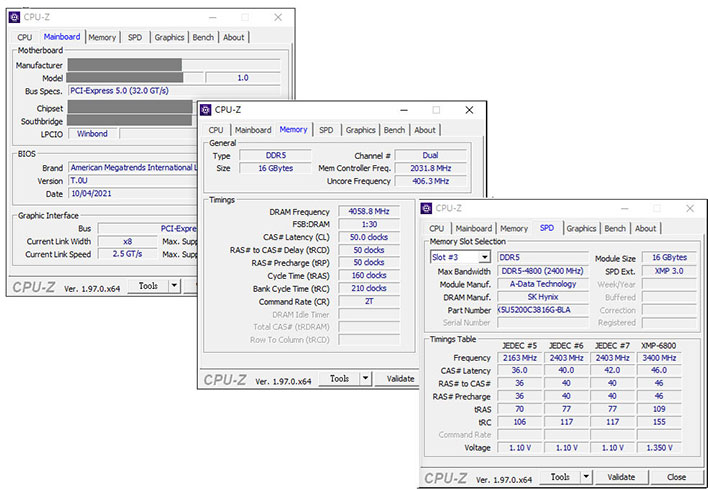 The answer remains to be seen. For now, though, Adata and XPG can brag at having achieved the highest overclock on DDR5 memory. It came at the expense of ultra-loose timings, which is the trade-off with DDR5 memory in general. In this case, the timings had to be relaxed to 50-50-50-160, compared to 40-40-40-77 at stock settings.
An impressive speed, but the buck won't stop there. It was just a couple of months ago when the company talked about plans to eventually release DDR5-12600 modules, operating at 1.1-1.6V. And in the shorter term, Adata intends on launching DDR5 memory at up to 8,400 MT/s.
The big question is how will Alder Lake respond to DDR5 memory compared to DDR4 RAM, and we don't have an answer yet. We're also curious to see how performance scales when pushing the transfer rate envelope well past 4,800 MT/s. Answers will come in time, as will more overclocking records once Alder Lake lands.