Although it’s a few years behind schedule, the final specifications for DDR5 memory have been released. The JESD79-5 DDR5 SDRAM standard was originally supposed to be released two years ago (2018), but now, new hardware based on the standard is expected to arrive in 2021 (late 2020 if we’re lucky).

There are a number of key improvements with DDR5 compared to DDR4, which will be increasingly beneficial given the rise of high-performance computing and the bandwidth needs of those platforms. Some of those enhancements include:

It’s expected that the first new consumer modules will operate at DDR5-4800 speeds. At the above-stated DDR5-6400 speeds, a dual-channel configuration would deliver 102GB/s of bandwidth compared to 51GB/s for a dual-channel DDR4-6400 setup. But of course, memory manufacturers will be free to go beyond JEDEC-sanctioned speeds (as they have done in years pasts). For example, SK Hynix has already said that it plans to eventually ramp to DDR5-8400 speeds.

“With several new performance, reliability and power saving modes implemented in its design, DDR5 is ready to support and enable next-generation technologies,” said Desi Rhoden, Chairman of the JC-42 Memory Committee. Needless to say, two leading chip companies also shared their pleasure with the prospects that DDR5 brings for performance and efficiency. 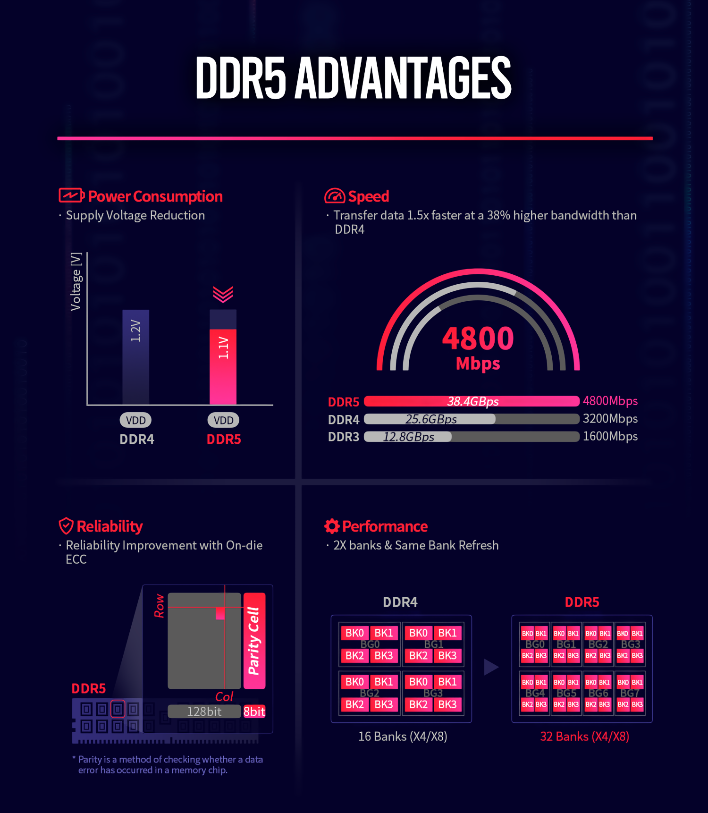 “High-performance computing requires memory that can keep pace with the ever-increasing demands of today’s processors,” said Joe Macri, AMD’s Compute and Graphics CTO. “With the publication of the DDR5 standard, AMD can better design its products to meet the future demands of our customers and end-users.”

“DDR5, developed with significant effort across the industry, marks a great leap forward in memory capability, for the first time delivering a 50% bandwidth jump at the onset of a new technology to meet the demands of AI and high performance compute,” added Carolyn Duran, who serves as VP for Intel’s Data Platforms Group and GM for Memory and IO Technologies.

According to earlier forecasting by IDC, DDR5 is projected to account for 43 percent of the overall DRAM market by 2022. And among the first to bring DDR5 modules to market will be SK Hynix, which is working hard to “secure mass-production levels in the second half of this year.”