Following up on Intel's recent expansion to its mobile 11th Gen Core CPU lineup, Acer has come out with some upgraded gaming laptops that pair the chips with NVIDIA's latest generation GeForce RTX 30 series GPUs (also in mobile form, naturally). They include the stylish Predator Triton 500 Special Edition shown above, and a more aggressive looking Helios 500.
Starting with the Predator Triton 500 SE, it is aimed at consumers who want a laptop for both play and work, hence the toned down design language for a Predator product. It packs plenty of firepower though—fully loaded, this thing can wield a Core i9 processor, GeForce RTX 3080 GPU, 64GB of DDR4-3200 RAM, and 4TB of PCIe 4.0 SSD storage, all crammed into a 0.78-inch chassis.
Tamer configurations will be offered, naturally. Buyers will also have multiple 16-inch display options. All of them are WQXGA panels with a 16:10 aspect ratio and 87 percent screen-to-body ratio. However, buyers can choose between a 165Hz LCD panel, 165Hz mini-LED panel with a 1,250 nits peak brightness and 100 percent coverage of the sRGB color space, or a 240HZ PolarBlack panel with a 3ms response time and 100 percent coverage of the DCI-P3 color space.
Other features include a full range of USB 3.2 Gen 2 ports (including dual Thunderbolt 4 ports), Killer connectivity (E3100 LAN and AX1650 Wi-Fi), and Acer's Vortex Flow cooling design with a triple fan arrangement and five dedicated heat pipes for the CPU and GPU.
Acer says the Predator Triton 500 SE will be available in the US in June starting at $1,750.

Acer's Predator Helios 500 drops any pretense of being a productivity laptop, at least in appearance—it has a definite gamer vibe. And like the Predator Triton 500 SE, it makes use of Intel's newest processors and up to a GeForce RTX 3080 GPU, along with a max 64GB of DDR4-3200 memory. However, Acer says the CPU can be overclocked in the Helios.
On the storage front, users can opt for a pair of NVMe SSDs in RAID 0 for the OS, and a SATA HDD for bulk storage chores. I'm not a huge fan of going with a RAID 0 setup when it comes to high-speed SSDs, especially for gaming, where the added speed will not yield much in terms of real-world performance, but will double your risk of data loss (if one drive goes bad in RAID 0 array, you can kiss your data on both drives goodbye).
For those who want RAID 0, though, it's an option. As for the display, this one packs a 17.3-inch screen, with multiple panel options as well. One of them is a 4K mini-LED panel with a 120Hz refresh rate and full-array local dimming (FALD), and another is a 1080p screen with 360Hz refresh rate and 3ms response time.
Killer is serving up the LAN and Wi-Fi connectivity on this model too, and it also comes with a decent selection of ports.
Look for the Predator Helios 500 to be available in August starting at $2,500. 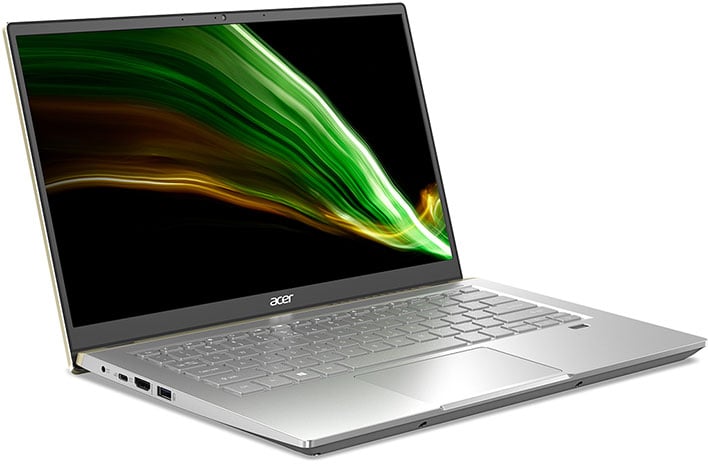 Acer did not forget about AMD, it just saved the Ryzen 5000 series for a different model, that being the Swift X. This one is a thin and light laptop, with a premium metal chassis that has a 0.7-inch waistline, and weighs just 3.06 pounds. It also comes in a variety of color options.
"Acer’s new notebook models are designed to offer consumers the widest possible choice of high-performance, ultraportable computing devices," said James Lin, General Manager, Notebooks, IT Products Business, Acer Inc. "Professionals need a clean-looking notebook that is compact enough to take with them throughout the day, but it also has to be powerful enough to run multiple resource-intensive programs at once. With every device we make, we’re always pursuing that balance."
The Swift X is a new segment within the Swift family, and the first to come powered with discrete graphics. Specifically, it boasts a GeForce RTX 3050 Ti GPU. It's not the fastest mobile GPU in NVIDIA's lineup, but it does enable ray-trace gaming.
Acer is offering the Swift X with up to a Ryzen 7 5800U processor, 16GB of RAM, and 2TB of SSD storage. And as for the display, it is a 14-inch IPS panel with a 1920x1080 resolution, 300 nits brightness, 100 percent coverage of the sRGB color space, and an 85.7 percent screen-to-body ratio.
The Swift X will be available next month starting at $900.