Acer has quietly rolled out what appears to be the world's fastest gaming monitor, the Nitro XV252QF with a whiplash-inducing 390Hz refresh rate. While for whatever reason Acer is not shouting about this from a mountaintop, these things never go unnoticed—it would be like your neighbor trying to nonchalantly sneak a Lamborghini into their driveway. You're going to see it.

There have been a few monitors to land with an almost equally insane 360Hz refresh rate, like the ASUS ROG Swift PG259QN, but Acer has apparently decided to get a step further because hey, why not? That said, this is almost definitely built around a 360Hz panel that has been overclocked to 390Hz. Other than the refresh rate, Acer's product page does not reveal a whole lot.
"Power up your gameplay with smooth, immersive visuals and true-to-life colors. Explore new worlds in stunning 390Hz IPS with AMD FreeSync Premium," Acer says. 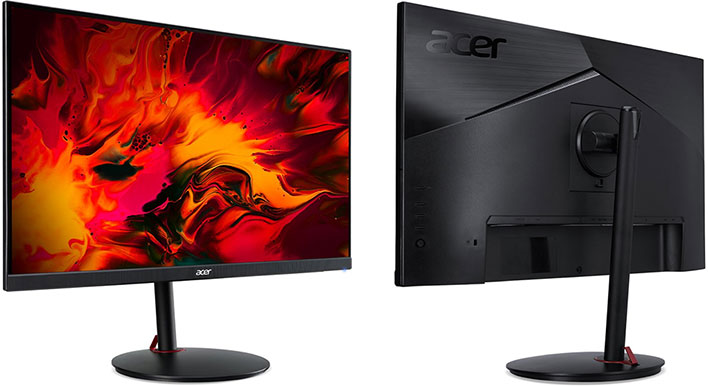 So it sports an In-Plane Switching screen and supports FreeSync to keep the onscreen action smooth and tear-free, at least when paired with a supported Radeon graphics card. The Nitro XV252QF product page also serves up a handful of low resolution photos, but little else.
That said, Swedish retailer Inet is accepting pre-orders for the new display, priced at 5,490 Swedish Krona. While pricing for computer hardware often varies by region, that works out to around $655 in US currency, based on the current exchange rate.
Just as importantly, the listing provides some more details about Acer's 390Hz display. As the model name suggests, this is a 25-inch monitor. According to the listing, it sports a 1920x1080 resolution and 1ms response time. Acer rates the brightness at 400 nits, and the listing hints it is bound for VESA's DisplayHDR 400 certification—it's not yet listed, but several similar models are, like the XV252QP and XV252QZ.
Why would you need a monitor this fast? Some people don't, though the ultra-fast refresh rate can be beneficial for less demanding esports titles like Fortnite, where it is conceivable that a GPU could hit sky high framerates. That's where the 1080p resolution works in its favor, as opposed to 1440p or 4K, which are both more demanding.
Still, it's a relatively niche product, especially if it ends up costing $600+ in the US. That's a tough ask for a 25-inch Full HD monitor, no matter how fast it can go.