A high-end graphics card may not be in Santa's bag of toys this Christmas, regardless of whether you ended up on the Nice or Naughty list. In lieu of a physical graphics card, you can rent one in the cloud through NVIDIA's GeForce NOW game streaming service. Even better, the preorder designation on its RTX 3080 tier has been removed.
That means you can sign up for the same GeForce NOW RTX 3080 tier we recently took for a spin and begin playing instantly. Say 'goodbye' to the waitlist and 'hello' to glorious gaming on GeForce NOW's highest tier, which enables playing at up to 1440p at 120 frames per second (PC and Mac), and extended eight-hour gaming sessions. 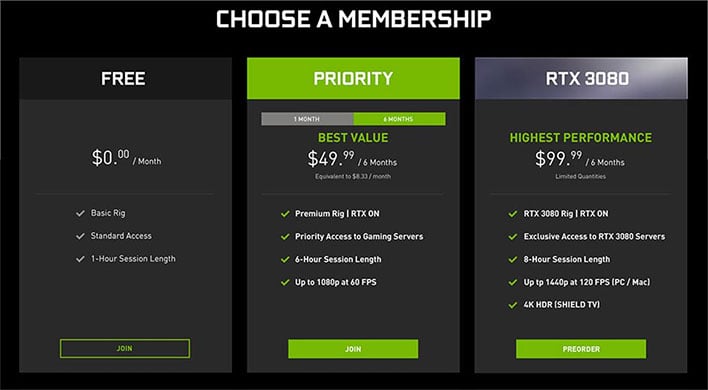 The RTX 3080 tier runs $99.99 for six months. That's a bit of a weighty investment and while not entirely the same experience, you may want to fire up the Free tier first to see if this is something you want to do. That said, we can tell you that in our experience, the RTX 3080 tier is very good. Ben Funk reviewed the service for us, noting that the "experience was great" in every game tested.
"We generally stuck to the most strenuous options of 1440p, 120Hz, and an automatic bitrate. We also stuck to Wi-Fi even though wired Gigabit Ethernet would probably be faster, just to give GeForce NOW a bit of a challenge and use a configuration representative of most consumers. It's not slow Wi-Fi by any means, however; our test systems both have 802.11ax Wi-Fi 6 modules and our ASUS AX3000 router is pretty high up on the food chain," Ben wrote.

You can read our GeForce NOW RTX 3080 review for in-depth analysis, but here's a sample of what we saw... 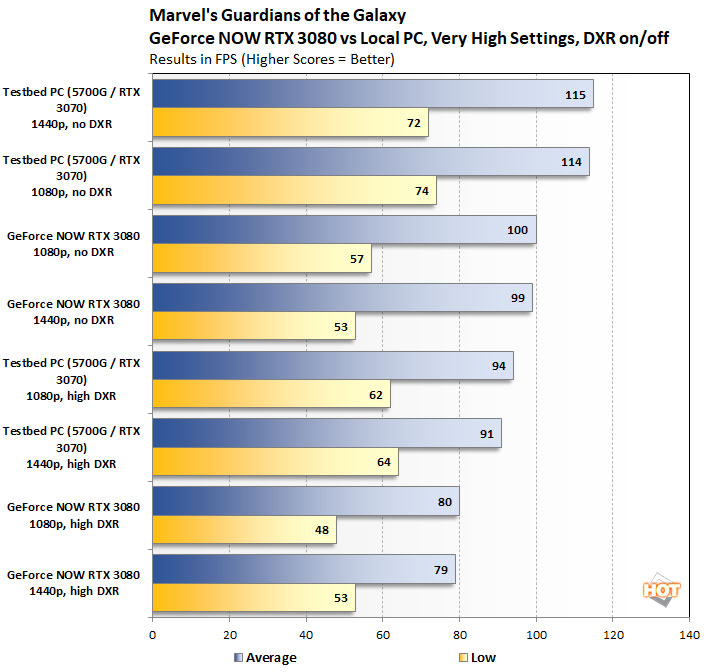 We'd say those results are very good overall, especially for what amounts to less than $17 per month when you break it down (or less—Founders receive a 10 percent discount on an upgraded RTX 3080 subscription with no risk to their 'Founders for Life' benefits). Also note that you don't need an expensive, high-end PC for this either—NVIDIA's servers do the heavy lifting.
"The new tier of service transforms nearly any device into a gaming rig capable of streaming at up to 1440p resolution and 120 frames per second on PCs, native 1440p or 1600p at 120 FPS on Macs, and 4K HDR at 60 FPS on SHIELD TV, with ultra-low latency that rivals many local gaming experiences," NVIDIA explains.
Not coincidentally, NVIDIA is offering a $20 discount on its SHIELD TV and SHIELD TV Pro, both of which also come with six months of Peacock Premium.
You can check out NVIDIA's blog post for more info.