Cryptocurrency mining is not going to fall by the wayside anytime soon, not when Bitcoin is setting new highs in value, and Ethereum holding the line at around $4,000. As it applies to the latter, and other forms of cryptocurrency that are still mined with GPUs, NVIDIA's CMP (Crypto Mining Processor) HX series of headless cards swing a mighty big pickax to potentially turn a profit. And so it goes with the CMP 170HX, which is not listed for sale.
We wrote about this card last month—it caught our eye because its high hash rate performance. We still can find neither hide nor hair of this SKU on NVIDIA's website, which lists just four CMP models: 30HX with a 26 MH/s hash rate, 40HX at 36 MH/s, 50HX at 45 MH/s, and 90HX at 86 MH/s. TDPs range from 125W to 320W.
The still-unannounced CMP 170HX, however, has shown up in a couple of spots. It's listed for sale by Vipera for a cool $4,300, and at the time of this writing, the retailer claims to have 230 cards in stock.
According to the listing, this mining card is capable of a 164 MH/s has rate. The underlying GPU is based on a cut-down GA100 die with 4,880 CUDA cores and 70 streaming multiprocessors, whereas a full-fat GA100 boasts 6,912 CUDA cores and 180 streaming multiprocessors.
These are probably chunks of silicon that didn't pass validation for a fully-realized GA100 (partially defective), and so repurposing them for mining cards is one way to extract some value from them. We're speculating, though.
The CMP 170HX also features 8GB of HBM2e memory tied to a 4,096-bit memory bus. It's said the GPU runs at 1,140MHz (base) to 1,410MHz (boost), and the memory runs at 1,458MHz for 1,493TB/s of memory bandwidth. Impressively, it draws power from a single 8-pin PCIe connector and has a 250W TDP, supposedly. 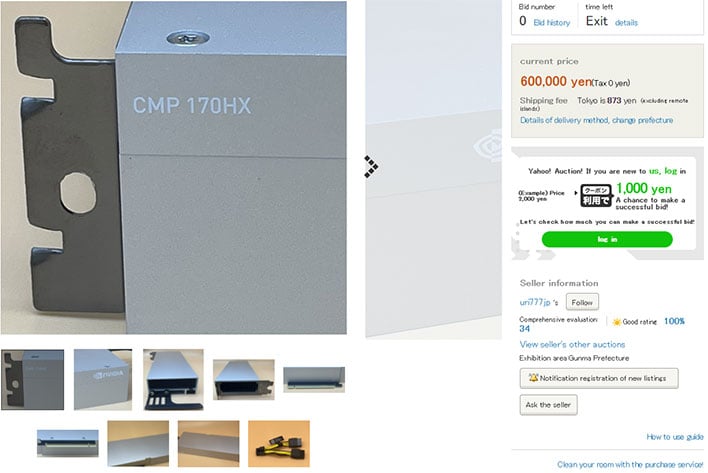 In addition to the CMP 170HX being listed at Viper for $4,300, it also showed up in a Yahoo auction in Japan, where the seller tried to fetch 600,000 Japanese Yen (~$5,288). It ended without a buyer, though.
Cryptocurrency is volatile, and the price of electricity varies by region. Generally speaking, though, mining Ethereum on this card with its advertised hash rate of 164 MH/s could yield around $330 per month in profit. Assuming everything held steady (and that's a big assumption), the card could potentially pay for itself in a little over a year.