Android users, specifically Google Pixel users, may soon have a way to purchase a Pixel 6 or Pixel 6 Pro in a manner much like Apple One. In a new retail leak, the existence of a so-called Pixel Pass service has emerged. Unlike Apple One, though, this bundle will presumably include a Pixel 6 phone, in addition to various subscriptions services.

The services that may be included in the Pixel Pass are Google One, Play Pass, YouTube Premium or YouTube Music, and Google Fi connectivity. These are all purportedly going to be bundled with either a Pixel 6 or Pixel 6 Pro handset. Pricing is still a mystery but is most likely going to be a US offering for now.

Google Fi needs to be activated in the US, even though it works in many other countries. Therefore, it could be that if this bundle is offered in other countries that Google Fi would not be included. 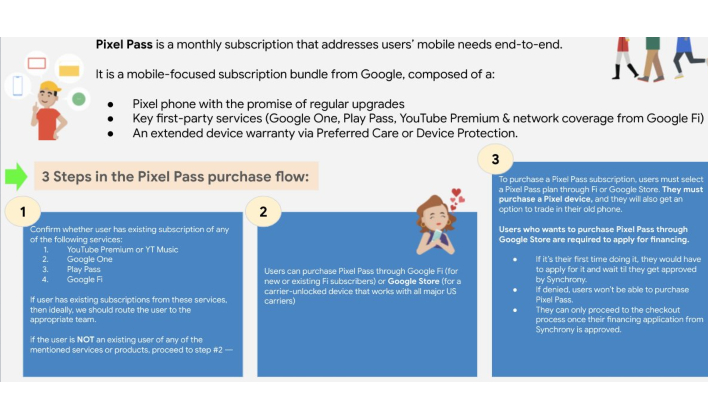 YouTuber M. Brandon Lee leaked the information recently on his Twitter feed. In the screenshot above one can see a purchase flow for what we assume is for Google employees. It seems that if someone already has one of the included subscriptions that they will be handled differently than someone who has none. Also, it is worth noting that you will be subject to passing a credit check before being approved.

The Pixel 6 is set to launch on October 19th. How much would you be willing to pay per month for a bundled service from Google with a Pixel 6 or Pixel 6 Pro? Would an offering like this make you more apt to purchase a Pixel 6? Let us know down in the comments.