When Intel announced its higher-performance Tiger Lake notebook CPUs with a 35 Watt TDP, the company proclaimed that it had snatched the single-threaded performance crown back from AMD. While Intel compared its new offerings to Ryzen 4000 CPUs based on the Zen 2 architecture, the new Core i7-11375H still surpassed its own predecessors as well according to internal benchmarks. However, these new 11th generation Intel Core CPUs still only featured four cores and eight threads thanks to Hyper Threading. That's still half of what AMD had already announced in the new Ryzen 5000 series of notebook processors, so at the time Intel was ceding the multi-threaded crown to AMD. That, however, is about to change.

Prolific leaker @momomo_us on Twitter has posted some "known information" relating to some upcoming 45-watt processors in Intel's 11th generation lineup. Several of these processors, including the unannounced Core i9-11980HK, Core i9-11900H, and Core i7-11800H, will apparently have upwards of eight cores in tow. @momomo_us says there's also a six-core Core i5-11400H on the way. This will purportedly combine Intel's leading single-threaded performance to CPUs with as many cores as those AMD has fielded in its mobile Ryzen 5000 lineup, which should make for some potent portable performance. 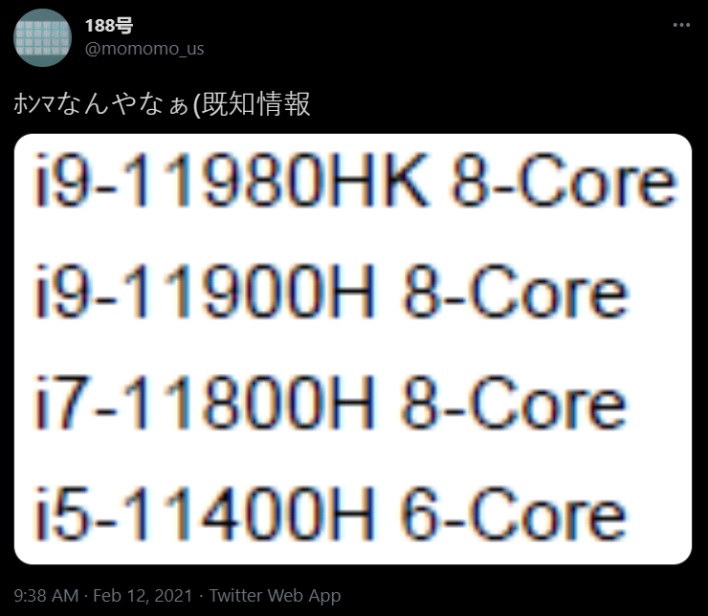 What's more is that these processors should be pretty darned fast. Thanks to a separate leak from Chinese-language website tcc2013 (bring your translator), we've learned that these processors should be able to hit 5GHz on multiple cores at the same time. Combine that with six to eight cores and double the hardware threads, and that makes for some strong possibilities in notebooks, and a huge departure from the existing quad-core 35-watt processors in the current Tiger Lake lineup. tcc2013 says the upcoming 45-watt Tiger Lake CPUs will also come packing 20 PCI Express 4.0 lanes and Thunderbolt 4 capabilities.

So far there's no word on when these CPUs might be released, but speculation focuses on the May to June timeframe around the regular time of Computex in Taipei. Of course, COVID-19 canceled Computex last year, so it's anybody's guess as to whether it will run in its traditional format or move to an all-digital format. That seemed to work well enough for CES 2021, at least. May and June are still several months off, however, so we've got time to wait. Hopefully by then, we'll see the light at the end of the tunnel on shortages caused by scalpers and crypto miners.