Between the bots and scalpers, silicon production shortages, and yes, even cryptocurrency mining (again), gamers are having a tough time buying the latest PC and console hardware. As it applies to the latter, Ethereum is on a sharp rise, having quadrupled in value over the past three months. While depressing, it is not too surprising to learn that miners are even employing the latest generation laptops with GeForce RTX 30 series GPUs nestled inside.
NVIDIA only recently announced its mobile GeForce RTX 30 series lineup. Laptop makers are busy making new models that pair the latest and greatest from NVIDIA with the newest silicon from AMD (mobile Ryzen 5000 series) and Intel. The prospect of playing PC games on a laptop has never been better, save for potential supply issues.
Miners in China have been paying close attention, and it seems some of them have managed to boost their cryptocurrency operations with laptops featuring NVIDIA's newest GPUs. This is seen in a handful of pictures Weibo user BTCer recently posted, including the one up top and these ones below... 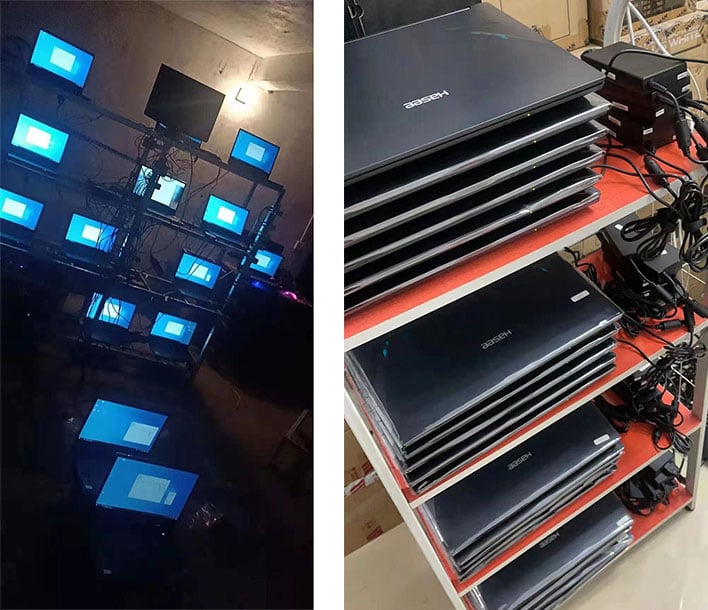 Details are sparse, but it seems miners are willing to pay a premium for laptops with Ampere GPUs inside, perhaps because desktop GPUs are so hard to come by these days. It still makes financial sense, because Ethereum is worth a mint. Miners can stack the laptops on racks and shelves, and go digging for cryptocurrency like any other mining setup.
Highlighting the potential for miners to make an easy buck with the latest hardware, Bilibili user "Fish Pond F2pool" posted a video of her mining on a laptop with a GeForce RTX 3060, at a local Starbucks coffee shop. A single laptop won't yield all that much—about $0.89 worth of Ethereum every two hours—but on a mass scale with more power GeForce RTX 30 series GPUs, it is easy to see why this is the current trend in China. 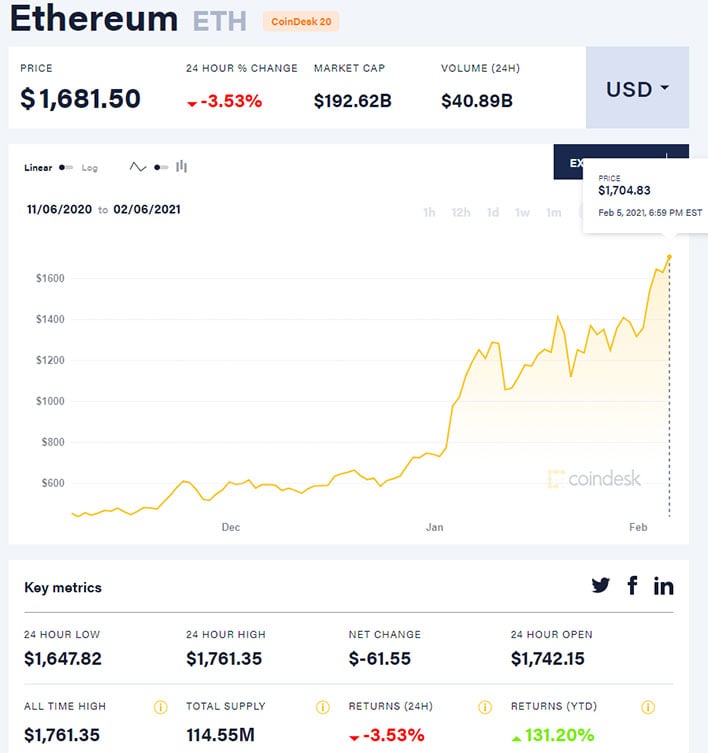 This is the reality we face, folks. Ethereum right now is trading for a little over $1,700, up from $1,123 a month ago today, and $592 from two months ago. And four months ago, it was trading for around $435.
How long the upward climb last remains to be seen, as cryptocurrencies in general are highly volatile. For the time being, however, it looks like this will be another factor that plays into the ongoing shortage of hardware.