Two days ago, Raja Koduri teased Intel's next-generation Xe-HGP gaming GPU running a new and, at the time, unreleased 3DMark Mesh Shader feature test. There was no information provided about the GPU, like what clockspeed it was running at or how it fared in the new benchmark. However, if you want to run it yourself, it is now available.
The new test evaluates Mesh Shader performance, which is a trick that is part of the DirectX 12 Ultimate application program interface (API). Part of the reason UL added the Mesh Shader feature test to its 3DMark suite is because it "shows how game developers can boost framerates by using mesh shaders in the graphics pipeline."

"Mesh shaders introduce a new approach to geometry processing that simplifies the graphics pipeline while also giving developers more flexibility and control. In 3D graphics, a mesh is the set of vertices, edges and faces that define the shape of an object. In current graphics pipelines, all the geometry data in a mesh must be processed sequentially before any further steps can be taken," UL explains.
The old way of doing things can serve as a "significant performance bottleneck," UL says. Mesh shaders offer an end-around of sorts, by processing small sections of a mesh, called meshlets, in parallel. Or as Microsoft explains it, these sections get dispatched into a set of threadgroups, each of which processes a subset of the larger mesh. 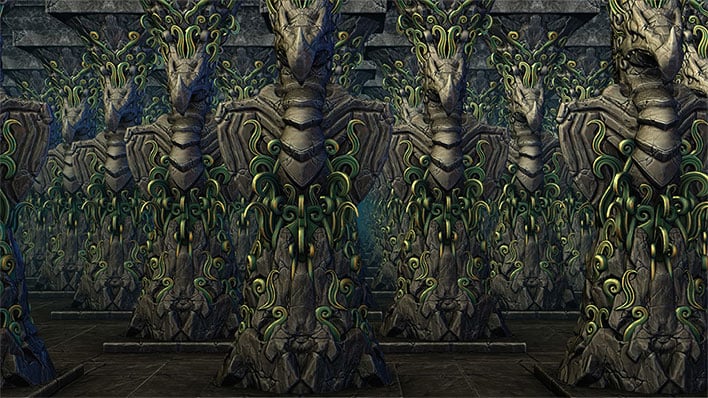 "Each threadgroup has access to groupshared memory like compute shaders, but outputs vertices and primitives that do not have to correlate with a specific thread in the group. As long as the threadgroup processes all vertices associated with the primitives in the threadgroup, resources can be allocated in whatever way is most efficient," Microsoft says.
UL's new Mesh Shader feature test in 3DMark consists of a test scene in a hall with rows of highly detailed, carved pillars. The test completes two passes—first with a traditional approach to geometry culling, which provides a baseline of performance, and then a second pass using mesh shaders.
Interestingly, there is also an interactive mode to help users visualize what mesh shaders are all about. UL says you can pause and jump to different parts of the timeline and change settings in real time, as well as mess around with visualizer options to highlight meshlets. 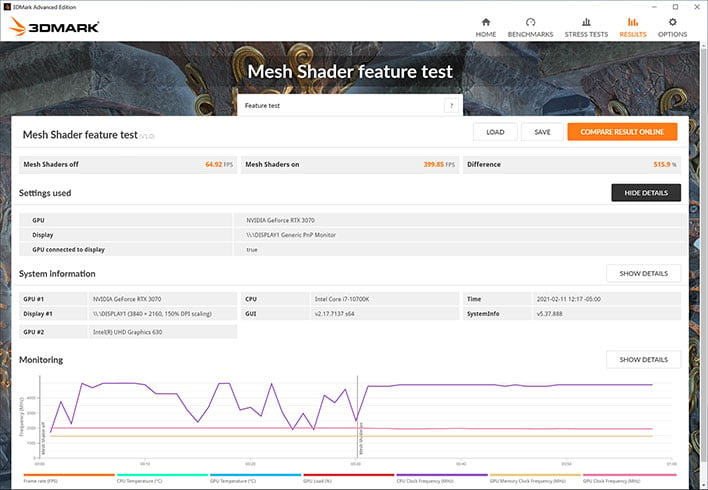 We ran the benchmark on the Dell XPS Desktop Special Edition we recently reviewed, outfitted with an NVIDIA GeForce RTX 3070 graphics card. During the first pass without mess shaders, it averaged 64.92 frames per second. Then during the second pass using mess shaders, it shot up to 399.85 frames per second. That is a massive 516 percent performance boost.
Whether actual games will see that kind of gargantuan jump in performance remains to be seen, but the benchmark results are certainly eye-popping. In any event, you can use our score as a baseline to compare your own PC to, if you are interested in running this benchmark.