Is 3dfx Making A Graphics Comeback? A Highly Suspect Tweet Has Us Filled With Doubt

While it may not have been the first 3D accelerator to market, the 3dfx (then, 3Dfx) Voodoo Graphics PCI was the add-in card that kickstarted the 3D gaming revolution. The company made its name on Voodoo graphics, but ultimately could not weather the storm of speedy cards that could process both 2D and 3D graphics. Eventually acquired by NVIDIA in late 2000 as an escape from bankruptcy proceedings, it was thought that the company and its intellectual property would never resurface in any sort of consumer-facing way. That is, until a mysterious Twitter account appeared this week, perhaps.

A Twitter account masquerading as @3dfxofficial, which joined the social networking service this week, has so far just posted a cryptic tweet teasing an announcement related to its triumphant return this Thursday, which is August 5th. That announcement could just be something cheesy, like "no 3dfx is not returning", but we're interested in seeing if there's something more. If this does turn out to be true, it seems likely that NVIDIA would have to give its blessing, as the company is the last known owner of 3dfx's IP. 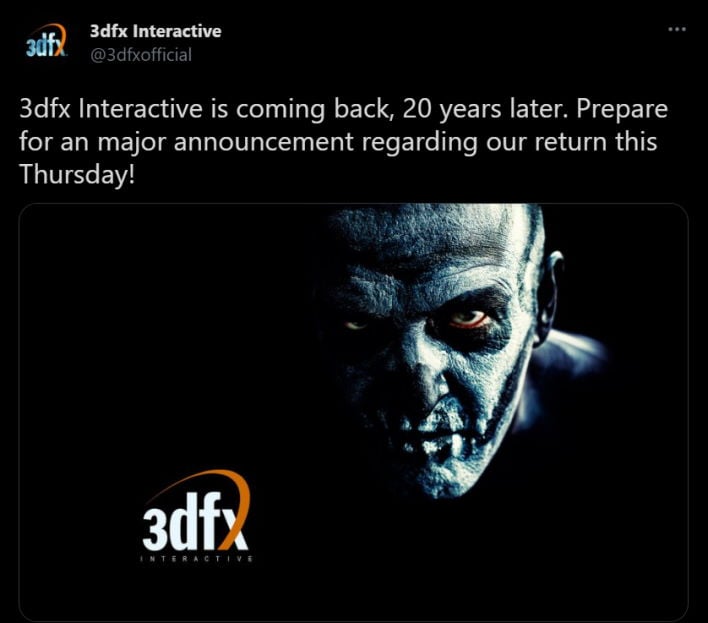 PC gamers of a certain age remember the Voodoo Graphics PCI, the first truly capable 3D card that could truly accelerate GLQuake to resolutions and performance levels that contemporary CPUs of the time just couldn't muster. The Voodoo was utterly incapable of accelerating simple things, however, like the Windows 95 desktop, leaving that task to the PC's 2D graphics card and sending the signal to VGA monitors via a pass-through cable. The Voodoo 2 was a smash hit successor, but not long after that the NVIDIA Riva TNT would challenge 3dfx's supremacy while also handling 2D tasks.

First the Voodoo Banshee and later the Voodoo 3 series would combine 2D and 3D into a single card, but 3dfx was falling behind on the 3D front. NVIDIA's chips and ATI's Rage 128 could both display 3D graphics with 32-bit color, something 3dfx couldn't do until the Voodoo 4 and 5 series. Finally, in late 2000, NVIDIA made a move to acquire the company among investor pressure to file for bankruptcy.

The Voodoo series was retired and production halted soon after the NVIDIA acquisition, ending the tale of 3dfx and its GLiDE 3D API. NVIDIA CEO Jen-hsun Huang testified years later that NVIDIA was interested in the engineering talent more than the IP. Much more recently, a Voodoo enthusiast known only as Anthony produced his own version of the legendary (as in, vaporware) Voodoo 5 6000, thanks to a plentiful supply of old VSA-100 chips.

Truth be told we're not too sure what to make of this Twitter account. For every bone in our bodies that wants to believe in the power of Voodoo, we just can't help but think this is some elaborate hoax. If the tweet is to be believed, we'll surely find out much more on Thursday when supposedly we'll learn more about 3dfx's plans to return, even if those plans are no plans at all. Stay tuned, and wax nostalgic with us about your Voodoo experience in the comments.