Following the announcement by Microsoft CEO Satya Nadella that the company is laying off 10,000 employees, 343 Industries issued a statement on the future of its highly-popular Halo franchise. The layoffs come at a time when other tech companies, such as Google and Meta, are cutting back its workforces as well.

Nadella announced last week that the company would be laying off employees as part of an effort to "align our cost structure with our revenue and where we see customer demand." The CEO said the cut in the company's workforce constituted less than five percent of the total number of employees worldwide. However, the layoffs had people wondering of how it might affect game companies like 343 Industries and the Halo franchise moving forward.

Even before the layoffs, the game developer had reportedly seen a wave of high-level departures. Perhaps the most prominent of those departures was studio head Bonnie Ross last September. Bloomberg reported recently that director and Halo writer, Joseph Staten, was leaving 343 for a publishing position with Xbox as well.

One of the recent rumors was from Bathrobe Spartan, who alleged that 343 lost one-third of its workforce, including contractors. Because of this, it was purported to be causing 343 to take on a "coordinating role," as opposed to being front and center in the development of any new Halo games. 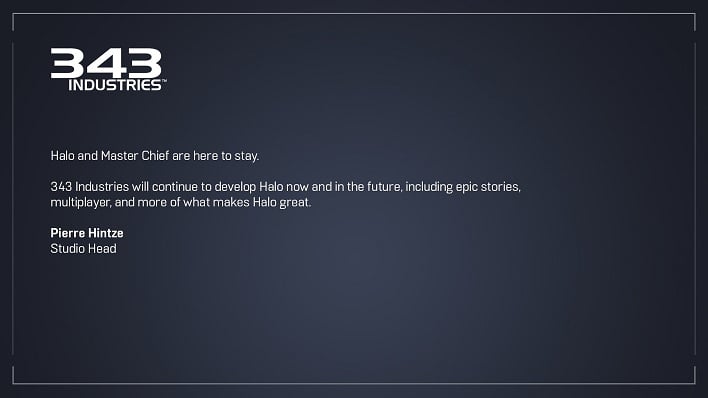 In order to try and put an end to any more rumors concerning the future of the studio, it issued a statement on its official Halo Twitter account. It began with a rather emphatic statement of, "Halo and Master Chief are here to stay."

While the statement falls short of addressing how many 343 Industries studio employees were laid off, or if other studios might be joining in to make future Halo games, it at least seems to assure the company's direct involvement in future Halo projects.