JEDEC was founded in 1958 as the Joint Electron Device Engineering Council. It originally had two branches: one for semiconductors and one for vacuum tubes. Nowadays, the group is technically known as the Joint Solid State Technology Association, but they didn't change the acronym, probably because "JEDEC" sounds way cooler than "JSSTA".

JEDEC is the group that defines the signalling standards for memory products. You can build a PC, slap any compatible RAM into it, and it "just works" without having to fiddle-fart with a bunch of jumpers or DIP switches, due in large part to the standardization work done by JEDEC  and its members.


Doing that usually won't get you the best performance, though, because JEDEC defines its specifications at a baseline level of performance that almost all ICs of a given type are expected to hit. The group does refine its specifications as time goes on and manufacturing improves, but right from the start of new technologies, there are always parts that far exceed the baseline. 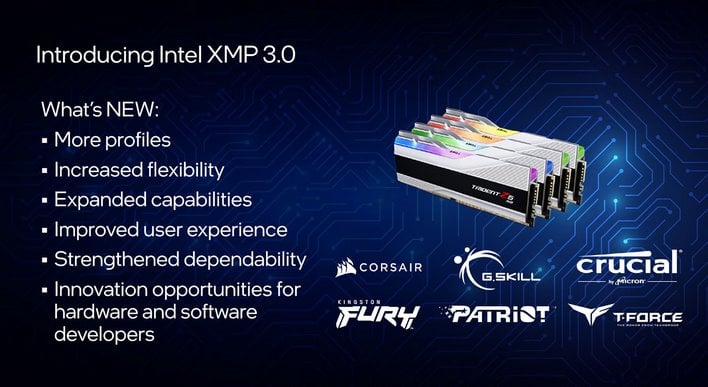 That's why Intel created its eXtreme Memory Profiles, or "XMP." Simply put, Intel XMP is a standard for "piggybacking" additional performance profiles on the JEDEC-standard profiles embedded in DRAM DIMMs. These profiles can define different clock speeds, timings, and voltages for memory modules that are known to exceed the baseline specifications and thus are capable of performance far past what a "standard" module can provide.

Most HotHardware readers probably already know all this. Regular readers also likely know that, despite XMP being an Intel standard, virtually all Ryzen motherboards will gladly read the information and make use of it—they simply call it something else, like "A-XMP" on MSI, "DOCP" on ASUS, or "EOCP" on Gigabyte motherboards. (Technically those latter two have more functions than just implementing XMP profiles, but roll with us here.)


Well, it seems AMD intends to introduce its own official optimization standard for DDR5 memory, and if the developer of HWiNFO has his info straight, it'll be called RAMP. That name came up in the patch notes of the latest update to the application, version 7.17, which you can see below.
This information comes from German-language hardware site ComputerBase, who went straight to the source to ask about the feature. The developer of HWiNFO64, Mumak, is a frequent user of that site's forums. As he told ComputerBase, RAMP stands for "Ryzen Accelerated Memory Profile," something we probably could have guessed for ourselves given enough time.


Mumak didn't offer up any details on how RAMP will work, nor how it will differ from XMP—if it will at all. In fact, checking this morning reveals that the "next update" notes for HWiNFO no longer mention RAMP by name, instead stating "Enhanced support of future AMD AM5 platforms."

Intel unveiled version 3.0 of the XMP spec last October, and we'd hope that RAMP will offer the same benefits as the revised Intel offering. In either case, it's most likely that the majority of motherboards will continue to support XMP profiles in case memory doesn't support RAMP.

AMD hasn't breathed a word about RAMP publicly yet, but we expect we'll be hearing all about it when AMD offers up more details about "Raphael," its Ryzen 7000 desktop CPUs. That information will probably come in Q2 or Q3, as Raphael is expected to launch in the second half of this year.