Think Your GPU Is Fast? Can It Run A Crysis Remaster With Real-Time Ray Tracing? 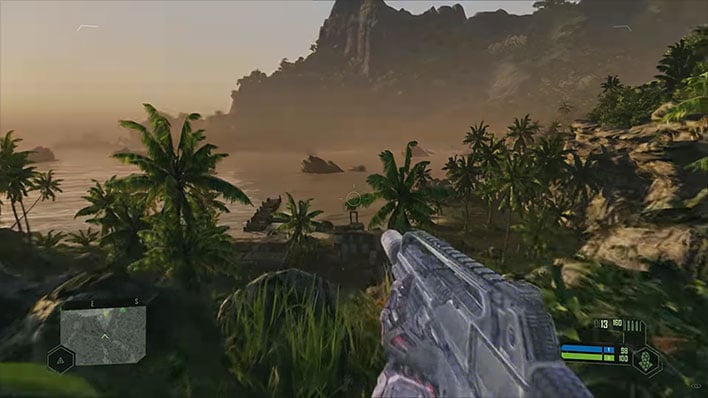 No, your PC's water cooling loop did not spring a leak (we hope not, anyway), it is just sweating in the face of a rumored Crysis remake potentially being in the works. While nothing is certain (yet), the official Twitter account for Crysis posted a cryptic tweet hinting that something is afoot. Could it be a remaster with real-time ray tracing, perhaps?
The tweet simply states in all caps, "RECEIVING DATA," with no other information, pictures, links, or videos attached. It is the first tweet to come from the official account since December 13, 2016, so it has been dormant for nearly three and a half years. At this point, it seems like only something big would awaken the account from its slumber.
Speculation is rampant at the moment. Adding a bit of intrigue to the situation, web sleuths had discovered that Crytek updated crysis.com with a new image on April 1, 2020. That date immediately elicits skepticism, and indeed, the HTML code for the page even lists "April Fool" among its tags. Now we're wondering if there was more to it.
The cryptic tweet also arrives around a month after Crytek uploaded a CryEngine Showcase video to YouTube. Have a look (and skip ahead to the 2min20sec mark for the particularly interesting bit)...
Crytek initially built CryEngine as a technology demo for NVIDIA, but it would go on to be used for games. CryEngine made its first big splash with the original Far Cry game released in 2004. A follow-up release (CryEngine 2) was used in Crysis in 2007, which at the time was a demanding first person shooter, leading to the meme, "Yeah, but can it run Crysis?"
The above video jumps to a clip of Crysis starting at the 2min20sec mark. That is a bit unusual to include at the end of a video highlighting a decade of games built on CryEngine, unless Crytek is hinting at a remasater being in the works.
Crytek has also showed off its efforts in real-time ray tracing over the past year. It released a Neon Noir ray tracing benchmark tool last year, and with the Xbox Series X and PlayStation 5 both adopting GPUs with support for ray tracing later this year (as well as upcoming RDNA 2 cards for PCs), it seems likely that a Crysis remake would feature the technology.
Nothing is certain, of course. However, Crytek certainly sparked a lot of interest with its cryptic tweet. If you have a few minutes to spare, read through the responses, which contain tweets from Corsair, Xbox, and others.