When it comes to the "future" of smartphone design, some manufacturers are looking towards innovative displays to stand out from the crowd. Xiaomi has decided to plot its own course with the new Quad-curved Waterfall Display Concept Smartphone.

While it's common to see flagship smartphones with gently curved displays on the sides, this new Xiaomi concept goes to the extreme with 88-degree curves. The main display spills over the left and right sides of the smartphone just like a... waterfall. This waterfall design also extends to the top and bottom of the display, which means that there is no room to include any external ports for the smartphone.

There are limits to what Xiaomi can do with wrapping the display, so you'll find that the four corners are blacked out. Xiaomi is quite proud of the technical wizardry that went into developing this display, remarking that "polishing a piece of such hyper-curved glass with a deep 88° bend on four sides requires self-developed glass processing equipment, hot bending under 800°C high temperature and pressure, four different polishing tools and up to more than ten complex polishing procedures."

Because of the lack of ports, the smartphone uses an eSIM for connecting to your wireless carrier of choice, while the typical physical buttons that you would find along the sides have been replaced with piezoelectric sensors. Wireless charging is the only way that the battery can be topped off (given that there's no USB-C port) and Xiaomi is employing its third-generation under-display selfie camera technology to forgo a notch and complete the immersive quality of the all-display look. 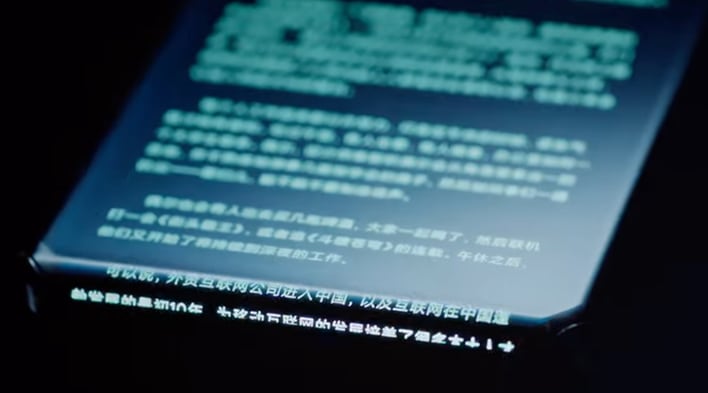 At this time, there is no indication of when the technologies introduced with the Quad-curved Waterfall Display Concept Smartphone will be applied to production devices.

It also should be noted that Xiaomi isn’t the only company out there with wild ideas for smartphone displays. In the case of OEMs like Samsung and Motorola, they have adopted folding displays. LG has gone in a completely different direction with its “Wing” swiveling dual-screen device, and has plans to unleash a smartphone this year with a rollable display.