When you woke up this morning, you probably didn't expect the Xbox Series X to be yours for the taking, assuming you've been trying to hunt one down. The latest generation console have been nearly as elusive as Bigfoot. But lo and behold, it's actually in stock at its MSRP. Just as enticing, there's no annoying membership paywall standing in your way.
Let's get right to it—you can find the Xbox Series X for $499 at Walmart right now (at the time of this writing, anyway). These restocks never seem to last very long, though, so you better hurry if you want to score one. This is shipped and sold by Walmart, too, not a marketplace seller (othewise it wouldn't be anywhere close to MSRP). 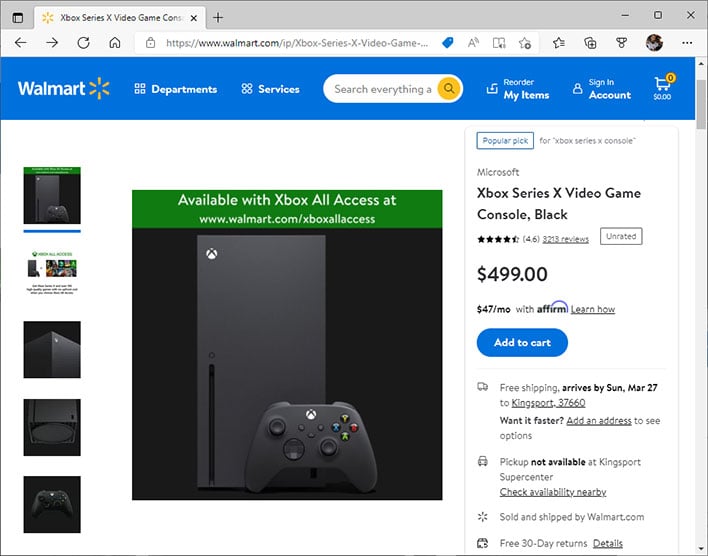 Additionally, you can find discounts on Xbox controllers...
This is a unique restock, in that Walmart lately has been 'hiding' inventory drops for the Xbox Series X and PlayStation 5 behind its Walmart+ membership program. That runs $12.95/month or $98 if paying for an annual subscription.
It's the same approach Best Buy has been taking with its GeForce RTX 30 series restocks, except the membership fee is much higher—it costs $199.99 to be a TotalTech subscriber. That's just the way it seems to be going lately, with vendors either forcing a membership program onto potential buyers or limiting consoles and GPU restocks to bundle offers.
In any event, you can avoid all that right now by heading to Walmart and grabbing an Xbox Series X. There's a limit of one, fortunately, so hopefully at least some of these end up in the hands of actual gamers rather than just scalpers.