In the near future, your Xbox Series X or Xbox Series S will likely be able to play Google Stadia games, simply because of its built-in web browser. Specifically, it is being infused with the latest version of Edge, built on Chromium, the same engine that powers Google's own Chrome browser. That brings with it unofficial support for Stadia.
As things officially stand, Chrome is the only browser that officially supports Stadia, Google's cloud game streaming service. However, it does actually work on some other browsers, with Google noting in a support page that it "may" play nice with Chromium-based browsers like Edge (version 79 or higher), Brave, or Vivaldi. And therein lies the reason why Stadia can work on the latest Xbox consoles.
Microsoft last year overhauled its Edge browser, switching over to Chromium. It has yet to port a Chromium-based build to Xbox users at large. However, Microsoft has begun rolling out a new "Alpha Skip-Ahead" build to Xbox Insiders (2004.200307-000), and while not mentioned in the release notes, it apparently includes the Chromium version of Edge. 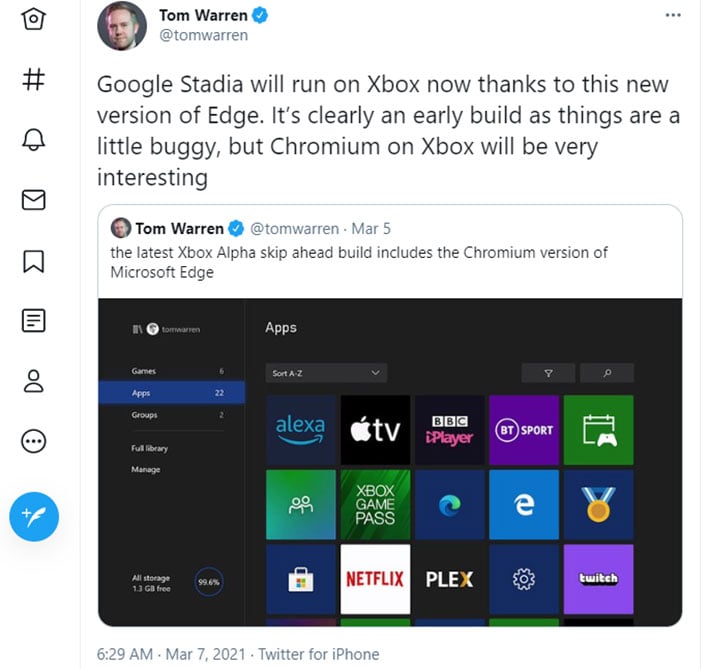 Tom Warren from The Verge notes it is "clearly an early build" and as such, it is a "little buggy," but it does work (no mouse and keyboard support, though). As to whether or not it is a pointless feature with xCloud coming, as someone in the Twitter threaded commented, he disagreed, pointing out that xCloud is "only 720p and soon 1080p," and that it does not run on Xbox game consoles. Stadia, meanwhile, scales to 4K.
That said, it's worth noting that Google recently shuttered its first-party Stadia Game Studios division. In a statement on the matter, Google pointed to the challenges of creating best-in-class games from the ground up, saying it requires a "significant investment, and the cost is going up exponentially."
Incidentally, having a Chromium-based browser on the Xbox Series X/S has other potential implications, like support for GeForce NOW. Now if only these new-generation consoles can become more widely available.