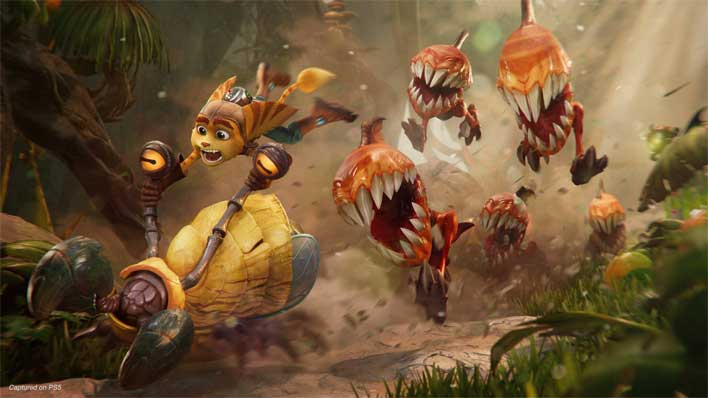 Many gamers are really looking forward to the launch of the PlayStation 5 and the next-generation games that it will bring with it. In a recent PS5 showcase, some of the next-generation games were shown off. Game dev Insomniac had two games in that showcase what many console gamers are excited about, including Marvel's Spider-Man: Miles Morales and Ratchet & Clank: Rift Apart.

A video was recently shared that features Insomniac Creative Director, Marcus Smith, who worked on the Ratchet & Clank: Rift Apart game. In the video, Smith talks about how the PlayStation 5 hardware helped the design team develop the game. As the quality of graphics increases, the size of the levels and files that are loaded by the console grow significantly. Developers were able to increase the number of objects in the game world, and the number of items players can explore, along higher fidelity 3D visuals, thanks to the PS5's fast SSD.

The PCI Express 4.0 NVMe SSD inside the PlayStation 5 is "screamingly fast," according to Smith, and allowed the developers to build worlds and project players from one place to another in the game at "near instantaneous speeds." Smith says that the swift SSD is a game-changer in terms of what the developers can do with gameplay, allowing them to have players in one world in one moment and another world in the next. The levels load so quickly that transfers feel natural, with no loading screens that gamers have to wait through before the action resumes.

Smith also talked about the PlayStation 5 controller and how it augments the sensorial experience for gamers. He said that the DualSense controller for the Sony console provides an incredible amount of tactile feedback when using weapons in the game that makes the weapons feel more powerful. Gamers are also able to feel how the weapon behaves in their hands. One very cool way the development team has leveraged the adaptive triggers of the PS5 controller comes with the use of a double-barrel shotgun weapon called the Enforcer.

Sony has been bragging about the ultra-fast SSD storage for the PlayStation 5 console since we first learned of its specifications back in March. One key feature of the Sony console that is still unknown is pricing. A recent leak from Amazon suggested that the console would cost about $560 with the physical optical drive and about $450 without.