We finally know pricing for the 1TB Game Drive that will be available for Microsoft's upcoming Xbox Series X and Xbox Series S game consoles, and it's not cheap. Best Buy is currently listing the Seagate 1TB Game Drive at a price of $219.99, which is surely to have many gasping in amazement.

We should note that the Xbox Series X and the Xbox Series S are using a PCIe Gen4x2 interface internally, which means that the onboard SSD is not nearly as fast as the PCIe Gen4x4 M.2 solutions that are available on the market for PCs. The 1TB Game Drive matches the speeds of the internal drive, which means that it offers I/O throughput of 2.4GB/sec raw, or 4.8GB/sec compressed.

Pricing for the 1TB Game Drive isn't that far off from Samsung's newly introduced 980 Pro, which is priced at $229. However, that SSD offers far greater performance, and pricing will likely drop as both production and competition ramps up. On the other hand, the price of the 1TB Game Drive is likely to stay the same throughout the lifecycle of the Xbox Series X/S consoles (save for sale events). This means that the only way that customers will be able to find relief is if smaller capacities are introduced or if another competitor is allowed to make cards to fit the proprietary storage slot after Seagate's exclusivity window closes. 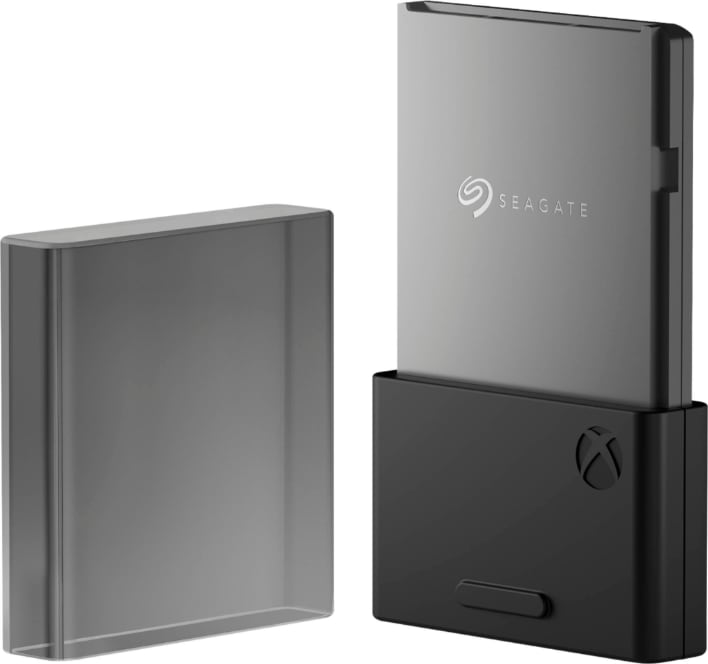 If you're thinking that you could just use an external USB hard drive or USB SSD to directly load your games if you run out of space instead of buying a Game Drive, you'd be partially correct. While you can run Xbox One series games directly from a USB connection, you can only use the internal SSD or a Game Drive to run Xbox Series X/S games if they take advantage of the new Velocity Architecture.

One thing to consider is that at $219.99, the 1TB Game Drive isn't that far off in price from an actual Xbox Series S console, which has just a 512GB SSD onboard and costs $299. Needless to say, it's going to be an expensive proposition for Xbox Series S gamers to add more storage to their console to match/exceed what's already available in the $499 Xbox Series X.

With that being said, many may feel more inclined to support Sony's approach with the PlayStation 5. The PlayStation 5 supports standard PCIe 4.0 NVMe M.2 SSDs as long as they can match the performance provided by the console's internal SSD (and are certified for use by Sony). This will [hopefully] give gamers a larger pool of SSDs to choose from, and allow them access to lower pricing and even higher capacities for their game storage needs.