It seems Microsoft has begun to make good on its promise to upgrade the hardware that drives its Xbox Cloud Gaming service. Nothing concrete has been announced yet, but players are noticing discernibly faster load times in some games, such as Rainbow Six Siege, as well as graphics options that did not exist before now.
There could be different reasons for this, though the one that makes the most sense is that Microsoft it upgrading its cloud gaming infrastructure with Xbox Series X hardware. This would explain both the faster loading times and new graphics options, and is in line with Microsoft's stated plans—the company announced earlier this month that an upgrade was imminent.
"We’re in the final stages of updating our Microsoft datacenters around the world with our latest generation of hardware, the Xbox Series X. This means gamers will see faster load times, improved frame rates, and experience Xbox Series X/S optimized games," Microsoft stated a couple of weeks ago. 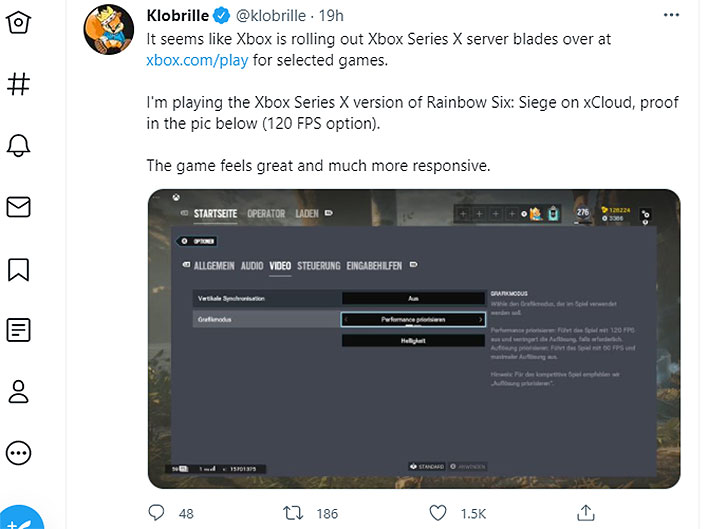 Formerly known as Project xCloud, the Xbox Cloud Gaming service enables playing over 100 consoles games various different devices, including Android and iOS gadgets, and on PCs (invite only) through a web browser (Chrome, Edge, and Safari). And following the current upgrade that is being deployed, some titles can be played at up to 120 frames per second through the service.

The concept is similar to other cloud streaming services—rather than tap into the capabilities of local devices, most of the grunt work is handled by hardware in the cloud. While not without its downsides (latency being the biggest one), there are numerous advantages, like not requiring expensive hardware upgrades, and being virtually immune to hardware shortages.
To that latter point, a global shortage of silicon has made it immensely difficult to buy the latest gaming hardware, including discrete graphics cards for PCs, and dedicated game consoles like the Xbox Series X/S and PlayStation 5.
Microsoft's upgrade from Xbox One S to Xbox Series X server blades for its Xbox Cloud Gaming service is a welcome one. It might also not be fully complete, whether in terms of deployment or flipping the switch across the board. For example, some games are not yet benefiting from the server upgrade, like NBA 2K21. However, several games are, such as Yakuza: Like a Dragon and Dirt 5.
Look for an announcement to come soon.