World Of Warcraft: Shadowlands Afterlives Gets A Cinematic Trailer And Release Date 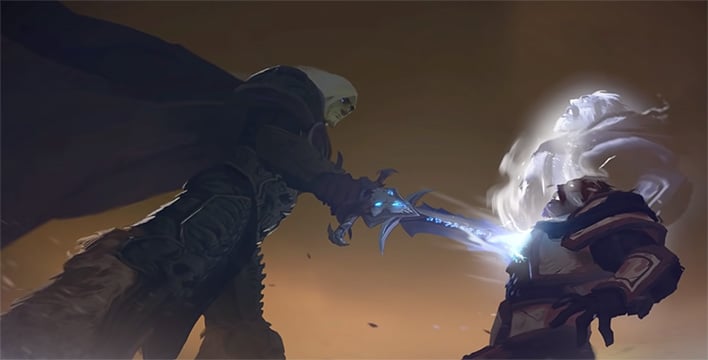 On same level, we all have wounded souls, in one way or another. Only most of us do not get a cinematic trailer that revolves around these injuries. Not so for Uther the Lightbringer, who is featured in Activision-Blizzard's new World of Warcraft: Shadowlands Afterlives: Bastion cinematic trailer, which lasts nearly seven minutes long. And even if you are not a fan of WoW, you may still find it gripping.
Shadowlands is an upcoming expansion pack for WoW, and it will thrust players into the realm of the dead. The eight expansion pack in the long running MMORPG will also introduce the game's first level reduction—the level cap is being reduced to 60, and players who are at the current level cap of 120 will be dropped down to 50.
The first part of the Shadowlands Afterlives series is Bastion, and that is what Blizzard highlights in the new trailer. Check it out...

"Uther the Lightbringer, Paladin of the Silver Hand, met an untimely demise ... but his service is not done. When he passes into the afterlife, Devos—a Paragon of Bastion—takes Uther under her wing, only to learn that some mortal wounds run deeper than she could imagine," Blizzard explains.
There is a lot going on here. This realm of the dead finds itself in disarray, with virtuous souls being wrongfully cast into the Maw, a place of eternal darkness—Hell or Hades, if you will. Meanwhile, the powerful factions that hold dominion over the afterlife's realms face ruin themselves, because the situation is just all kinds of messed up.
"In Shadowlands, players will explore one of the Warcraft universe’s most mysterious undiscovered frontiers," said J. Allen Brack, president of Blizzard Entertainment. "And in selecting a Covenant to align themselves with, they’ll face one of the most challenging decisions they’ve ever made in the game—one that will impact nearly every aspect of their experience with this expansion."

Blizzards promises both "wonders and horrors" in Shadowlands, as players align themselves with one of four different Covenants, each with unique story campaigns, gameplay features, and powers. The trailer above highlights the Covenant called Kyrian.
Shadowlands is up for pre-order now. It costs $39.99 for the base edition, $59.99 for the Heroic Edition (adds a character boost and the Ensorcelled Everwyrm mount), $79.99 for the Epic Edition (everything in the Heroic Edition plus the Anima Wyrmlin pet, Wraithchill cosmetic weapon, and Eternal Traveler's Hearthstone), and $119.99 for the Collector's Edition (the only non-digital edition with a spattering of goodies).
World of Warcraft: Shadowlands is scheduled to launch globally at 4:00 pm PT (7:00 pm ET) on October 26, 2020.